James Anderson’s artistic morning spell in an inspired English bowling performance blew away India for an inexplicable 78 as the hosts took complete control by stumps with a dominant batting show on the first day of the third Test here on Wednesday.

If England pacers got their bearings right after the fifth day brain fade at the Lord’s, India’s famous batting unit’s technique against swing bowling was laid bare by Anderson and his band which skittled them in little over 40 overs.

Then it was turn for local boy Haseeb Hameed (60 batting, 130 balls) and Rory Burns (52 batting, 125 balls) to get back to form ending the day at 120 for no loss with batting getting much easier as the day progressed.

Skipper Virat Kohli won a rare toss and despite the overcast conditions decided to bat first which in the end turned out to be a not so great decision as Anderson’s injured new ball partner Stuart Broad tweeted about how the Headingley track has behaved over the years.

Anderson (8-5-6-3) then did what he does best — messed with the minds of the top-order batsmen in a sharp eight-over morning spell getting three wickets and then passing on the baton to the younger lot which didn’t disappoint him.

Ajinkya Rahane scored 18 but had it not been for 16 extra runs, the embarrassment would have been more like the Adelaide Test match It was a shoddy performance as the pitch although termed “tacky” by England skipper Joe Root didn’t have any exaggerated off-the pitch movement that could have troubled the batsmen. 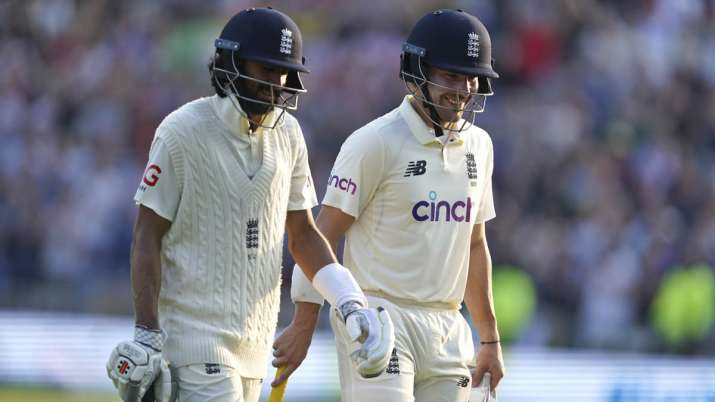 It was just that Anderson turned his stock ball (outswinger) into a shock ball during that dream spell which left Indians gasping for breath.

Having seen an in-form KL Rahul (0) leave the outswingers alone, Anderson started with inswingers before unleashing one with a wobbly seam with a hint of outward movement as the opener went for a drive and became one of the five catches that Jos Buttler took.

Cheteshwar Pujara (1) is plain and simple out of form and clueless about his off-stump as a classic outswinger found his edge.

Then Anderson did what has been his day job for past seven years. Dismiss Indian skipper Kohli (7) for fun. The Indian skipper had tweaked his front-foot movement a bit as it didn’t go across off-stump.

However the eagerness to over-compensate as Sachin Tendulkar recently pointed out made him jab at the ball to make it 21 for 3.

Rohit did display impeccable defence but once Rahane was out at the stroke of lunch with Robinson getting one to rear up awkwardly and Rishabh Pant playing away from his body without any feet movement, he didn’t have resources to accelerate.

But credit should also go to the English bowlers who extracted every bit of juice that was available during the 40.4 overs.

India lost their last six wickets for 22 runs and this time, the Indian tail had no pleasant surprises in their kitty. This had more to do with sensible bowling from England pacers, who bowled fuller length to bowl out India for their second lowest first day score in last 34 years.

The lowest first day score for India was back in 1987 when fiery Jamaican Patrick Patterson scared the hell out of Dilip Vengsarkar’s team, skittling them out for 75 at the Feroz Shah Kotla in New Delhi.

The batting performance certainly increased pressure on the bowlers and it didn’t help that veteran Ishant Sharma looked completely out of sorts as Kohli gave him the new ball. He ran in gingerly and there was no sting in his bowling helping Hameed and Burns to settle down quickly.

Once the sun started beating down and made batting easier, they played some lovely shots square off the wicket, helping themselves with half-centuries as India will have a huge task of saving the Test match from hereon.

2021-08-25
Previous Post: ENG vs IND | Cheerio Virat! Barmy Army taunts Kohli on return to pavilion during 3rd Test – WATCH
Next Post: What putting big things in quantum states can tell us about reality