Captain Virat Kohli enjoyed pool season with Royal Challengers Bangalore teammates on Tuesday. The Bangalore based franchise is gearing up for the 13th edition of Indian Premier League in bid to their first-ever title. The franchise shares regular updates of the training sessions on social media to engage with fans, who will not be allowed in the stadium this season.

Kohli on Wednesday posted a couple of photos on Instagram from the pool session with his teammates. “A proper day at the pool yesterday,” he captioned the post.

RCB also posted photos from the session on Twitter and labelled it: “We’re all Aquaholics.”

In the photos, RCB players are seen playing volleyball in the pool, with Kohli, AB de Villiers, Dale Steyn, Yuzvendra Chahal on one side and Umesh Yadav, Mohammad Siraj, Shivam Dubey on the other. Kohli’s men turned out to be the winner in the pool volleyball tournament, revealed by RCB themselves in the comment section of the skipper’s post. 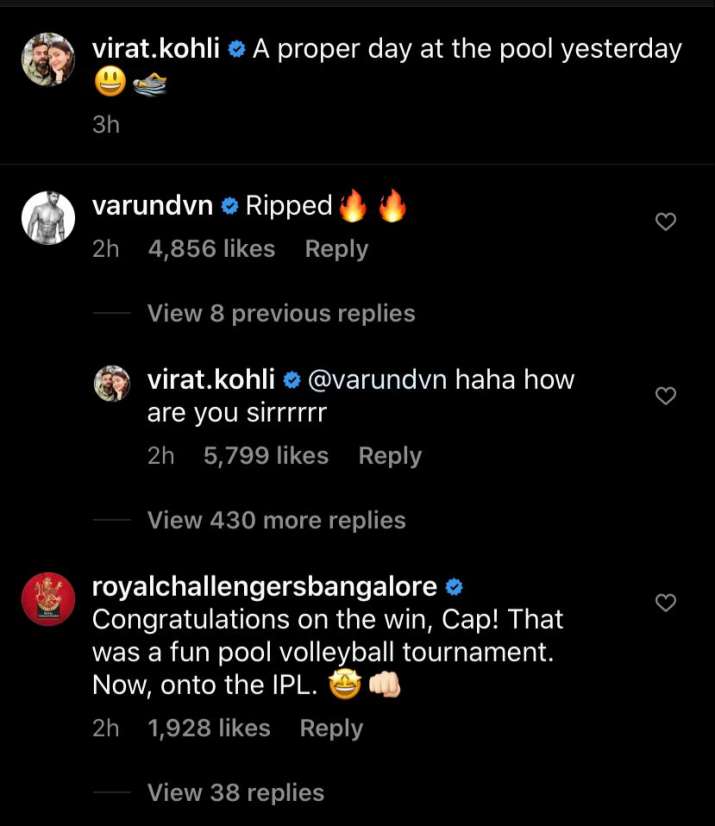 Earlier, AB de Villiers hailed Virat Kohli’s ability to lead from the front. De Villiers feels that the RCB captain sets the example for others and it’s easy to follow him.

“We have worked very hard, we have a good work ethic, it really feels like everyone has bought into this hard-working environment. The credit needs to go to Virat, he sets the example and leads from the front. It is pretty easy to follow when you have a captain leading from the front. I am just excited to see the final product of this hard work,” ABD said in a video posted on RCB’s official Twitter handle.

RCB will start their 2020 IPL campaign against Sunrisers Hyderabad in Dubai on September 21. RCB will look to start the season on a fresh note after a disastrous last edition where they finished last on the points table.