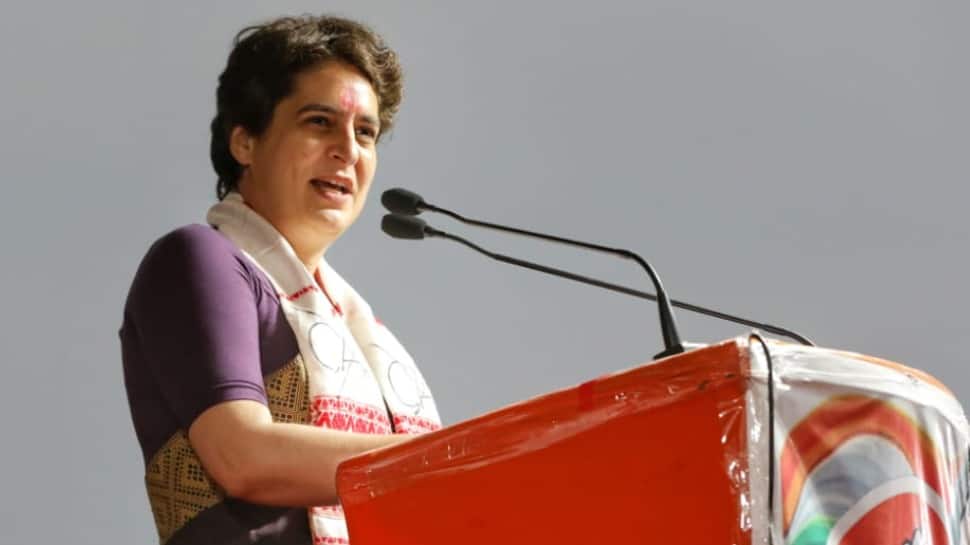 New Delhi: Congress general secretary Priyanka Gandhi Vadra on Monday claimed that BJP leaders talk about implementing the Citizenship Amendment Act (CAA) in various parts of the country, but lack the courage to mention it in Assam.

The state witnessed violent protests against the CAA in 2019 and five persons lost their lives. The protestors saw the law as a threat to their cultural identity and livelihood.

The grand alliance of the Congress and six other parties will form the government in Assam after the election as people are fed up with the false promises made by the BJP, she said.

She was clad in a handwoven traditional Assamese ‘mekhla chador’, with designs typical of its Mising tribe.

“The BJP makes tall promises before elections but during the next five years, they do nothing to fulfil them and people have realised it,” the Congress leader told reporters after addressing a meeting of party workers at Lakhimpur.

BJP leaders move around the country talking about implementing the CAA but they are silent about it when they come to Assam, Gandhi said.

“They lack the courage to mention it in the state and people of Assam should never allow them to even talk about it, let alone implement it,” she said.

The objective of the CAA is to grant Indian citizenship to people of minority communities Hindu, Sikh, Jain, Buddhist, Parsi and Christian of Pakistan, Bangladesh and Afghanistan, who had come to India till December 31, 2014, due to religious persecution in these countries.

Indicating that there is more than one power centre in the BJP-led government in Assam, she said, “We are confused on how many chief ministers the state has — one, two or many. Or is it remote-controlled from outside?”

Beginning and ending her speech with “Joi Aai Asom” (Hail, Mother Assam), the Congress leader said, “You are not fighting for the party or your seat but Assam’s identity and your motherland”.

The BJP-RSS ideology is such that it does not take the cultural identity of the state or its people into consideration, she claimed.

Prime Minister Narendra Modi came to the state and spoke about “Assam tea being attacked” but what about the identity of the state that is under attack due to the policies of his government, she said.

“If he really wanted to save Assam tea, why did he not increase employment opportunities for them or enhance their minimum daily wages as promised before the election?” the Congress leader said.

Union Home Minister Amit Shah had promised that Clause 6 of the Assam Accord would be implemented to safeguard the indigenous population but it was not done, said Gandhi.

As per Clause 6 of the Assam Accord, Constitutional, legislative and administrative safeguards, as may be appropriate, shall be provided to protect, preserve and promote the culture, social, linguistic identity and heritage of the Assamese people.

The bone of contention since the signing of the Accord in 1985 has been the definition of the Assamese people.

“When the Assam Accord was signed, I was just 14 years old and heard my father (Rajiv Gandhi) talking to somebody on the phone (about it). Later, he told me that elections would be held in Assam and though the Congress would lose, he wanted what is the best for the people of the state,” she said.

A six-year agitation demanding identification and deportation of illegal immigrants was launched by the All Assam Students Union (AASU) in 1979.

It had culminated with the signing of the Assam Accord on August 15, 1985 in the presence of the then prime minister Rajiv Gandhi.

The people of Assam suffered immensely during the lockdown and the subsequent floods but these leaders did not come then but as the election is nearing, they are making repeated rounds to the state, she claimed at another party meeting at Gohpur in Bishwanath district.

“The state, despite being rich in resources, has to buy many products, including fish and the ‘Gamocha’ (traditional towel) from outside,” said Gandhi who is on a two-day visit to Assam starting Monday.

During the last five years, people have seen price rise, unemployment, police examination scam in which BJP members were involved, she alleged.

Gandhi launched a protest programme of unemployed youths, urging them to vote after taking into consideration all aspects that will save their future.

Earlier, she offered prayers at the famous Kamakhya Temple at Guwahati and visited the birthplace of Madhavdeva, who was the primary disciple of Srimanta Sankardeva, the 15th century cultural and religious icon of the state, at Letekupukhuri in Lakhimpur district.

A large number of people greeted her at the venues she visited. Gandhi also danced ‘jhumur’ and ‘bihu’ at two places along with local dancers.

From the Lilabari Airport in Lakhimpur, she travelled to various venues in a bus used in the Congress’ ‘Save Assam’ poll campaign.

Elections to the northeastern state will be conducted in three phases – on March 27, April 1 and April 6.