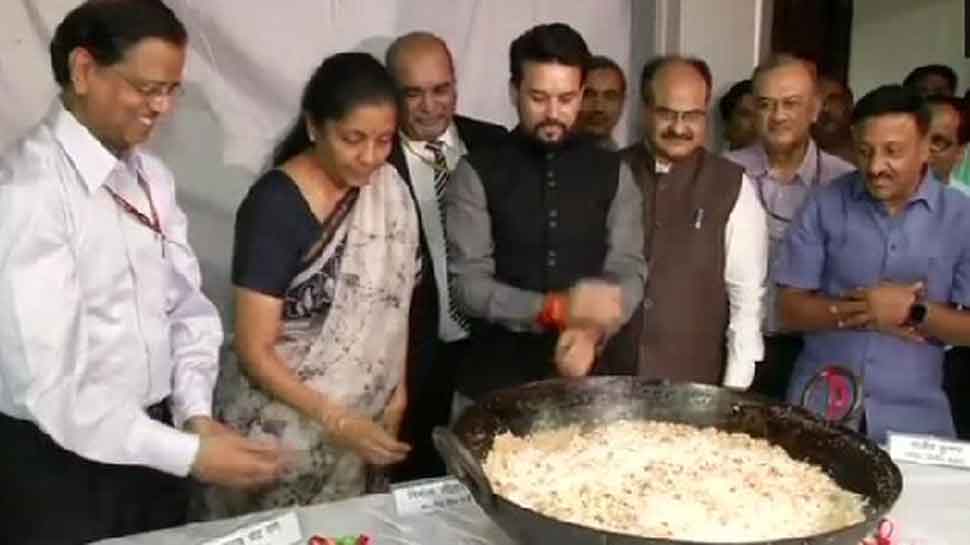 New Delhi: The traditional halwa ceremony which marks the process of printing budget documents will be held on January 20 that is 10 days ahead of the Union budget presentation in the parliament. The ceremony will be attended by Finance Minister Nirmala Sitharaman along with the other officials and support staff of the finance ministry who will be involved in the budget preparation.

The ceremony will take place at North Block where the Ministry of Finance and the Home Ministry is situated. The making of halwa marks the official kick-start of the event.

Know about the significance halwa ceremony:

In this decades-old tradition, Indian dessert halwa is prepared in a large vessel and served to the finance ministry staff. After the ceremony, the employees who are a part of the budget-making process, move to the basement of North Block for around 10 days to prevent any leaks before the annual Budget is presented.

The budget-making group will be released from the basement only after the Finance Minister presents the Budget in the Lok Sabha. The officials involved in the process can only contact their families through designated mobile phones.

Besides this, the ceremony also recognises and lauds the efforts of every staff who have been a part of the budget-making process.

The Budget will be the seventh consecutive Budget of the present NDA government and it is scheduled to be unveiled in Parliament on February 1.

As per predictions, the government is likely to announce a distressed asset fund of Rs 5,000 crore for micro, small and medium enterprises (MSMEs) facing liquidity crunch in the upcoming Budget 2020-21 and it may also bring some relief to the middle-class taxpayers by announcing reductions in the tax rates.