She’s so proud of herself 😸

Potato is only 7 months old, and her full-time job is exploring her new home and trying to find trouble to get into. Her favorite thing to do is hang out with her brother, and they’re normally attached at the hip, but whenever he’s napping or otherwise occupied, Potato loves to climb and explore everywhere she can. 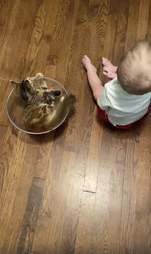 “She’s always finding things to climb in,” Haley Gates, Potato’s mom, told The Dodo. “She hangs from curtains [and] screens.”

Gates and her fiancé were watching a scary movie recently when Potato got bored and decided to explore inside the closet for a while. Her mom figured there wasn’t too much mischief she could get into in there — but, of course, she was wrong.

Potato discovered a row of empty hangers in the closet, and immediately decided to invent a new game.

“[She] climbed from my suitcase to my dresser to the hangers and I got my phone out as fast as I could to record her,” Gates said.

Potato somehow shimmied her way into the hangers, using them as a tunnel of sorts, and just hung out there, basically suspended in midair. It sort of looked like she was stuck, but she didn’t seem to consider herself stuck. Potato knew exactly what she was doing.

She hung out up there for a while until she reached a dead end and couldn’t keep crawling forward, and eventually fell out of the hangers, ending her fun new game. 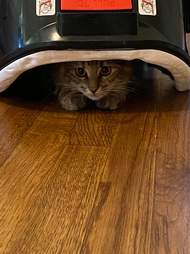 “She was in the hangers for about 10–15 minutes but she was playing in my closet for at least 45 minutes,” Gates said. “She plays in the closet all the time but never has done that before!”

Potato is always looking for new games and things to play in, and there’s no doubt that she’ll attempt to play her fun new “crawl through the empty hangers” game again very soon.