Pumpkin was the only orange cat in a litter of rescue kittens his family was fostering. They weren’t initially planning on keeping any of them, but ended up adopting Pumpkin and his brother Moustachio. When the time came, they just couldn’t let them go.

As Pumpkin started to grow, his family discovered that he has a mild case of cerebellar hypoplasia. It affects his coordination and depth perception, but he never lets it get in the way of his adventures.

“We say he’s clumsy like a puppy,” Tia Stoddard, Pumpkin’s mom, told The Dodo. “He looks more like he trots than runs, his front paws up one at a time.”

Pumpkin has always loved being outside, and goes on tons of adventures with his family. He’s been hiking and kayaking, and one day, his mom and sister decided to try taking him to the beach for the first time. 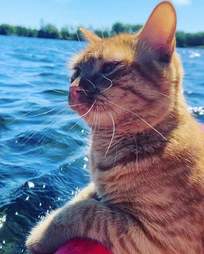 As Pumpkin explored the beach, running around in the sand, he seemed to really be enjoying himself — until the wind started to pick up. That’s when his family discovered that the adventure cat was not at all a fan of the wind.

“He actually really loved the beach but we soon found out he didn’t love the wind,” Stoddard said. “The faces he was making, we’d never seen anything like it before, so we were taking pictures and videos.” 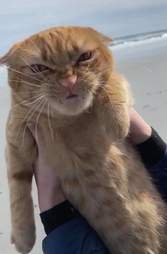 As the wind hit Pumpkin, he made the funniest, sassiest faces his family had ever seen … 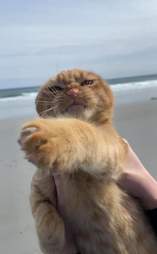 … and they couldn’t stop laughing at how much he clearly did not enjoy the wind.

Pumpkin had very, very strong opinions about the wind at the beach that day, and he was definitely not shy about letting them be known.

Since then, Pumpkin has been back to the beach many times. He still loves playing and running around, but the wind will never be his thing.