When Gus was first adopted, he wouldn’t come out from under the bed for five months. He’d gone through a lot before arriving in his new home and was so anxious and scared at first. His dad showed him nothing but patience and love, and after a while, Gus finally began to come out of his shell.

“I fed him under the bed, had his litter under the bed and just let him recover in his own time,” Sebastian Hart, Gus’s dad, told The Dodo. 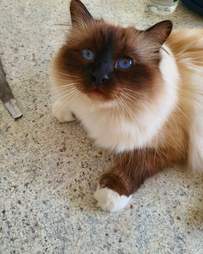 While Gus was overcoming his anxiety, Hart was going through his own as well, and the pair were both able to recover with each other’s help. 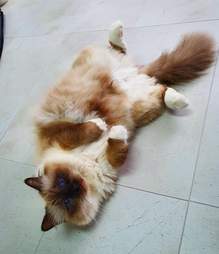 Gus is a very chatty cat, and loves to tell his dad all about everything he sees. One day, Gus was meowing quite a lot, but his dad didn’t really think anything of it at first. He thought it was just Gus talking about his day.

“When he was carrying on from the side of the house I didn’t think much of it at first, just figured he was seeing a butterfly or whatever,” Hart said. 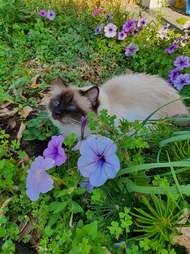 Gus wouldn’t stop meowing, though, and kept coming up to his dad and then running back outside, looking worried. His dad finally decided to follow him outside to see what all the fuss was about — and that’s when he discovered a baby bird who had fallen from her nest.

“He was sitting in front of this tiny baby chick,” Hart said. “It was screaming for its mum … Gus was calling out to me to help this tiny little thing out.” 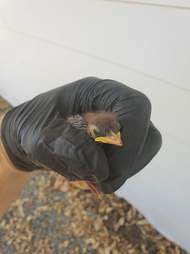 Gus had found the lost baby bird and had immediately turned to his dad for assistance. He knew the little baby needed help, and desperately wanted to be there for her.

Hart could see the nest the baby bird had fallen from, and quickly went about getting her safely back home where she belonged. 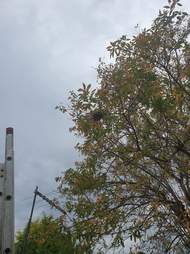 “I ran into the house to get a ladder and gloves,” Hart said. “I left Gus with the bird, came back within a couple of minutes and Gus was still there watching over it. Honestly, it was remarkable.”

Gus knew the little bird needed protection, so he diligently watched over her until his dad was finally able to lift her back up into her nest and reunite her with her family.

“I got on the ladder and put the bird in its nest, realized there were two more in there and saw the bird’s mother watching the whole thing,” Hart said. “Gus figured his job was done [and] went back to chewing his cat grass. It was just so wholesome.” 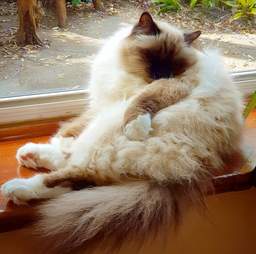 Once the baby bird was safe, Gus went about his day again, much calmer after making sure his little bird friend was OK. Some people might be surprised that a cat would care so much about a tiny bird — but Hart wasn’t. That’s just how Gus is.

“He’s a very kind cat, has never scratched, bitten or hurt me or anyone,” Hart said. “He’s just a really nice little dude. I’m blessed to have him in my life.”