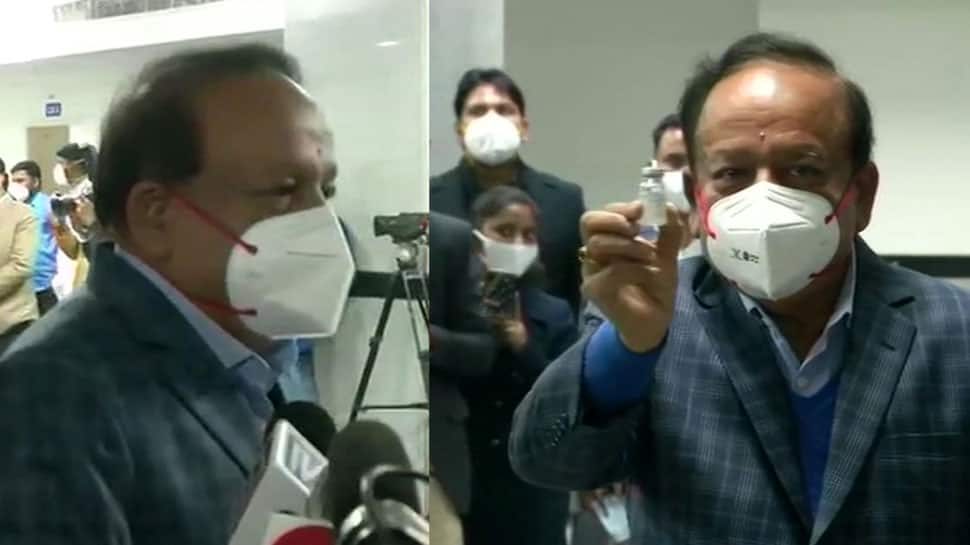 New Delhi: Union Health Minister Harsh Vardhan on Saturday described the COVID-19 vaccines as ‘Sanjivani’ in the fight against the infectious disease as he urged people not to pay heed to hearsay and instead believe in experts and Indian scientists.

Earlier today, Prime Minister Narendra Modi launched the world’s largest vaccination programme covering the entire length and breadth of the country and urged people to show patience during the COVID-19 immunisation drive as they had shown till now in fighting the pandemic.

“It’s a historic day. We have been blessed by the Prime Minister all through our fight against COVID-19. It’s the largest coronavirus vaccination programme in the world,” Vardhan told reporters at the All India Institute of Medical Sciences (AIIMS) here.

Congratulations India on the launch of world’s #LargestVaccineDrive

“We have been able to put up a valiant fight against the disease during the last year. Adopting a pre-emptive and proactive strategy has resulted in a very good performance by India. We have probably the lowest fatality rate in the world,” he said.

Thanking all, including doctors, nurses, healthcare staff, security personnel and journalists, who have been at the frontline in the fight against the pandemic, the Health Minister said ‘they ensured India reaches the stage when vaccine gets delivered to the people.’

“These vaccines are ‘sanjivani’ in our fight against this pandemic. We have won the battles against polio and smallpox. Now, we have reached the decisive phase of winning the war against coronavirus.

“I want to congratulate all frontline workers on this day. At times when rumours are being spread, I hope the media will spread the correct information and this move will help in the fight against the disease,” the Health Minister said.

Asserting that both the vaccines are safe and effective, Vardhan urged people not to give in to hearsay and instead believe in experts. “They have put their heart and soul into it,” he said.

This will be the world’s largest vaccination programme covering the entire length and breadth of the country. According to the government, the shots will be offered first to an estimated one crore healthcare workers, and around two crore frontline workers, and then to persons above 50 years of age, followed by persons younger than 50 years of age with associated comorbidities.

Cost of vaccination of healthcare and frontline workers will be borne by the central government.

The Drugs Controller General of India (DCGI) had earlier this month approved Oxford COVID-19 vaccine Covishield, manufactured by the Serum Institute, and indigenously developed Covaxin of Bharat Biotech for restricted emergency use in the country.