“I couldn’t believe it!”

The other day, Dawn Bete’s husband was at home, napping by the pool, when a curious bear decided to drop by.

But the bear did more than just have a look around. 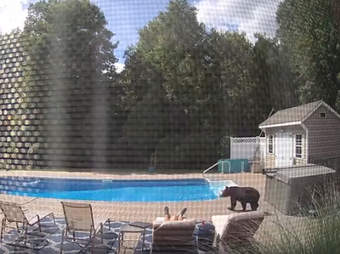 While Bete’s husband dozed, the bear wandered in and took a few sips of the pool’s cool water. It was only then that she seemed to notice the human reclining in a chair nearby.

And, almost as if to prank him, the bear then gave Bete’s husband’s foot a gentle nudge — startling him awake.

Shortly after, Bete got a text about what happened.

“I just thought [my husband] was joking until he asked me to check out Ring [camera] footage,” Bete told The Dodo. “There it was!”

Here’s that moment on video:

Though the notion of being randomly awoken by a bear might seem like a scary one, Bete’s husband took it all in stride. As is nearly always the case, the bear meant no harm — and she appeared more frightened by the encounter than he did.

Still, it’s one Bete and her husband (and likely the bear) won’t soon forget. Why Does My Dog Hate My Boyfriend Or Girlfriend?