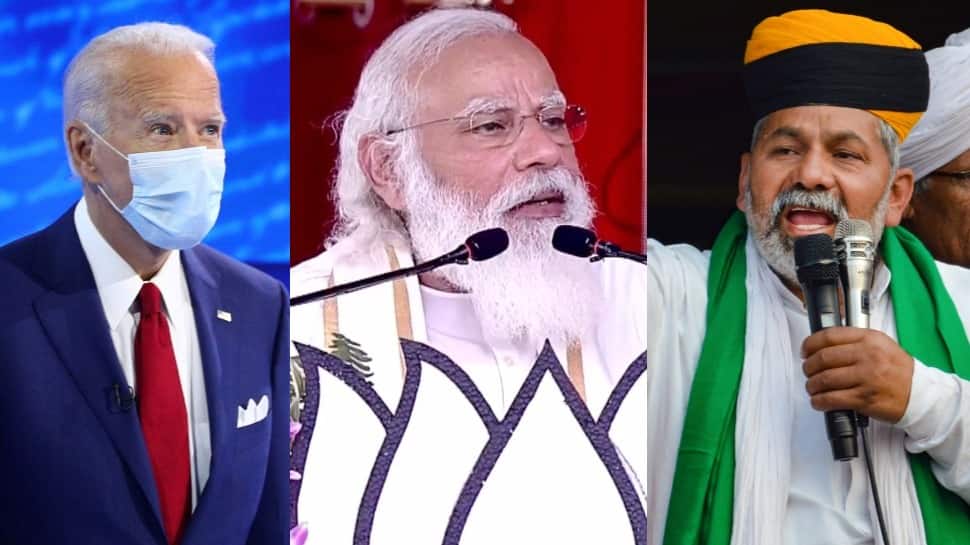 “Dear POTUS, we the Indian Farmers are protesting against 3 farm laws brought by PM Modi’s govt. 700 farmers have died in the last 11 months protesting. These black laws should be repealed to save us. Please focus on our concern while meeting PM Modi,” Tikait tweeted.

Dear @POTUS, we the Indian Farmers are protesting against 3 farm laws brought by PM Modi’s govt. 700 farmers have died in the last 11 months protesting. These black laws should be repealed to save us. Please focus on our concern while meeting PM Modi. #Biden_SpeakUp4Farmers

Tikait has been leading the protests of hundreds of farmers who have encamped at the Delhi borders since November 2020 and are demanding that the three contentious farm laws be repealed and a legal guarantee provided to them on minimum support price of crops.

The Centre, however, has maintained that the new laws are pro-farmer and has held 11 rounds of formal dialogues with the farmers.

This is to be noted that during his three-day US visit, Prime Minister Narendra Modi is scheduled to meet with President Joe Biden at the White House on Friday evening. This will be the first in-person meeting between the two leaders after Biden took over as the US President in January this year.

Foreign Secretary Harsh V Shringla had earlier informed that Modi and Biden will review ‘robust and multifaceted’ India-US bilateral ties and will hold a discussion to bolster bilateral trade and investment ties. Both leaders will also discuss the current regional security situation following the recent developments in Afghanistan.

Post his meeting with Biden, PM Modi will also take part in the first-ever in-person Quad leaders meeting along with leaders of the US, Japan, and Australia in Washington.

Japan is one of India’s most valued partners. I had an excellent meeting with PM @sugawitter on a variety of subjects that would further boost cooperation between our nations. A strong India-Japan friendship augurs well for the entire planet. pic.twitter.com/5N9ibqWDzy

It is always wonderful to interact with my good friend, PM @ScottMorrisonMP. We had wide-ranging deliberations on strengthening cooperation in the fields of commerce, trade, energy and more. pic.twitter.com/rRkNxNc8Nr

Glad to have met @VP @KamalaHarris. Her feat has inspired the entire world. We talked about multiple subjects that will further cement the India-USA friendship, which is based on shared values and cultural linkages. pic.twitter.com/46SvKo2Oxv