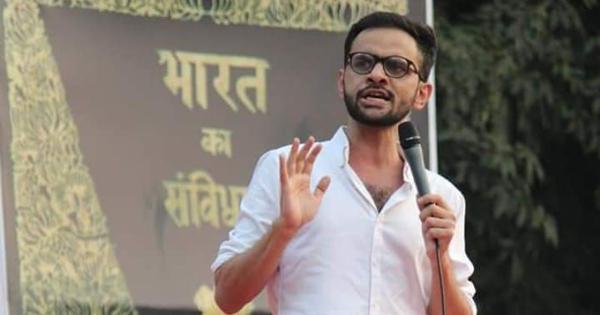 Former Jawaharlal Nehru University student Umar Khalid was arrested late on Sunday for his alleged role in the large-scale communal violence that broke out in North East Delhi over the Citizenship Amendment Act in February, PTI reported.

The Delhi Police’s Special Cell arrested Khalid under the Unlawful Activities (Prevention) Act after nearly 11 hours of questioning. Khalid has been accused of being one of the main conspirators involved in the violence, a senior unidentified police officer told The Hindu.

Khalid will be produced before a court in Delhi on Monday. Unidentified police officials told The Indian Express that they are likely to file a chargesheet against him in the next few days

Activist group United Against Hate, of which Khalid is a member, said he was arrested as a “conspirator” in the violence. “The fairy tale narrative that DP [Delhi Police] has been spinning and criminalising protests in the garb of investigating riots, finds yet another victim,” the group said in a statement, according to NDTV.

Khalid’s name had appeared in the chargesheet submitted by the police against suspended Aam Aadmi Party councillor Tahir Hussain. The chargesheet stated that on January 8, Hussain met Khalid and United Against Hate co-founder Khalid Saifi at Delhi’s Shaheen Bagh during a protest against the Citizenship Amendment Act, where “Umar Khalid told him to be prepared for something big/riots at the time of the visit of US President [Donald Trump]”.

In April, the former JNU student was charged under the UAPA in another case related to the violence. He was accused of instigating the violence by allegedly making provocative speeches.

The former JNU student at the time had refuted the allegations against him and said he was being falsely implicated. “It is an upside down world that we are living in, in which these organisations and individuals that have worked for communal harmony are being implicated,” he had said.

The police’s chargesheet also annexed two identical “disclosure statements”, in which the Delhi Police claimed that Pinjra Tod activists Devangana Kalita and Natasha Narwal admitted to not just their complicity in the violence, but also named Ghosh, Apoorvanand and Roy as their “mentors”, who asked them to carry on the protests even if it led to violence.

Clashes had broken out between supporters of the Citizenship Amendment Act and those opposing it in North East Delhi in February, killing 53 people and injuring hundreds. The violence was the worst Delhi saw since the anti-Sikh violence of 1984.