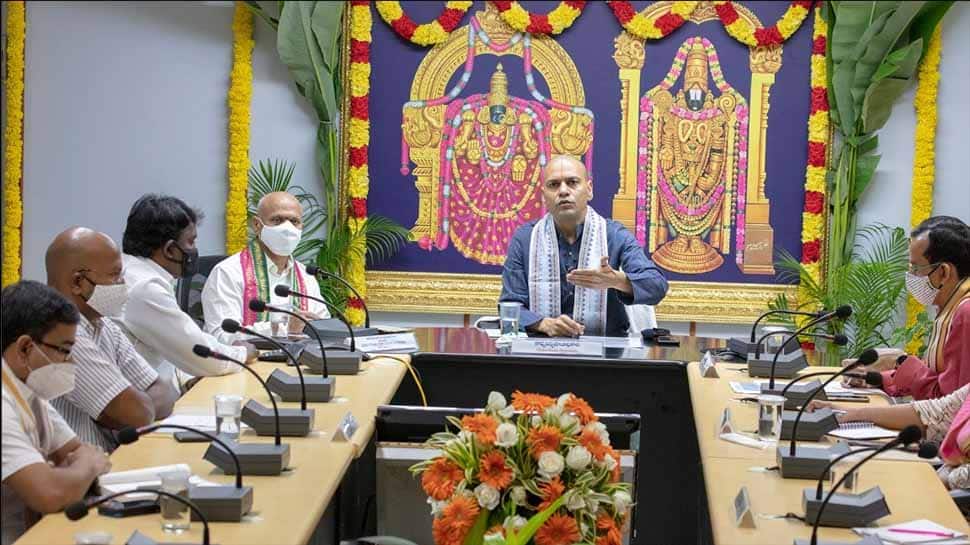 Tirupati: It’s raining accolades from pilgrim callers across India for the live streaming of various Parayanams in Sri Venkateswara Bhakti Channel (SVBC) of Tirumala Tirupati Devasthanam (TTD) during the monthly ‘Dial your EO Programme’ that took place in the meeting hall of TTD Administrative Building in Tirupati on Sunday (September 13, 2020).

Pilgrims Gita Prakash from Hubli, Karnataka, Sri Subramanyam from Chennai of Tamilnadu, Ramachandramurthy, Sujata and Sandhya from Hyderabad, Telangana, Prasad Rao and Srinivasulu from Nellore, Chengappa from Ramasamudram, Ramadevi from Tenali called in to thank TTD for designing Parayanams and telecasting live on SVBC especially during COVID pandemic and sought to continue forever.

Thanking all the pilgrim callers through a live phone in a program, the EO said, all the parayanam programs have won not only from across different parts of the country but globally.

“Never before in the history of SVBC since its inception some 12 years ago, has received such an overwhelming response for its programs and we are glad to see the reception from devotees,” he said.

Further he said, TTD will continue the programmes for ever as SVBC is the best tool to reach wide range of pilgrims to take up Hindu Sanatana Dharma to the nook and corner. Apart from Parayanams, we are also contemplating to design some programs targeting children and youth as there is every need to imbibe and teach the values embedded in our epics and scriptures to the next generations”, he maintained.

Answering a caller Appanna from Visakhapatnam, who sought protection to sacred chariots of TTD in view of Antarvedi incident, the EO said, TTD has hi-fi security cover for its properties and chariots. “Our Chief Vigilance and Security Officer along Urban SP also had an elaborate meeting on how to extend protection at all temples recently. So no need to worry as we are fully geared up”,  he added.

When a pilgrims sought to resume Sarva Darshan, EO told them, TTD has earlier released 3000 tokens of time slot Sarva darshan tokens in offline. But following a caution call about the spread of corona as devotees are gathering in thousands from other states owing to Peratasi holy month floating the norms of Social Distancing and wearing masks, we have temporarily stalled issuing tokens at Tirupati till this month-end.

On a query on Vaikuntha Ekadasi Darshan during December, EO said, the decision will be taken based on the Covid situations and norms issued by Central and State Governments.

Before taking the calls from pilgrims, EO said to have a transparent administration the auditing of TTD properties will be carried out by Comptroller and Auditor General. The EO said TTD is often dragged into multiple controversies by those with vested interests saying that our funds are being diverted to other causes other than Hindu Dharma Prachara and auditing by CAG will put an end to all”, EO asserted.

The EO said, darshan for Online Kalyanotsavam. Grihatas is introduced by TTD and the devotees who booked in online can avail darshan within 90days from the day of their booking. He also said, Kalyana Kankanams will also be sent along with Prasadam through the postal department.

Similarly, as we have stalled all arjitha sevas due to covid, the Udayastamana Seva ticket holders and Vimsathi Varsha Darshini ticket holders will be given darshan in VIP break till situation turns to normalcy, he maintained.