At 10.45 in the morning, next to the gate with an iron grill, an ambulance is parked with its door open. Inside, the Covid patient is lying on his back, an oxygen mask on his face. Next to him is his wife, her hand clasping his. For five minutes, there is silence, then shouts outside. “Where will we take him?” asks a family member angrily. “What can we do if there is no space,” a nurse responds. She turns to the patient’s wife: “Just don’t let him fall asleep.”

It’s a replay of familiar scenes outside Covid isolation wards across the country since early April when the second wave started wreaking havoc. But then, this is the district hospital of Muzaffarnagar, in Uttar Pradesh, a state which has the fourth highest active caseload in the country with over 2.6 lakh cases.

UP has recorded more than 7.82 lakh infections since April 1, which is 55 per cent of the country’s entire caseload. And, nearly 40 per cent of its death toll of 14,151 has been recorded after April 1, with high caseloads in smaller towns like Gorakhpur, Bareilly, Moradabad and Meerut.

With Maharashtra starting to level off, how the Covid curve plays out in UP will define its national spread. To get a sense of this, The Indian Express has set off on a journey, beginning with Muzaffarnagar in western UP to track the second wave in India’s most populous state even as next-door New Delhi fights a bruising battle. 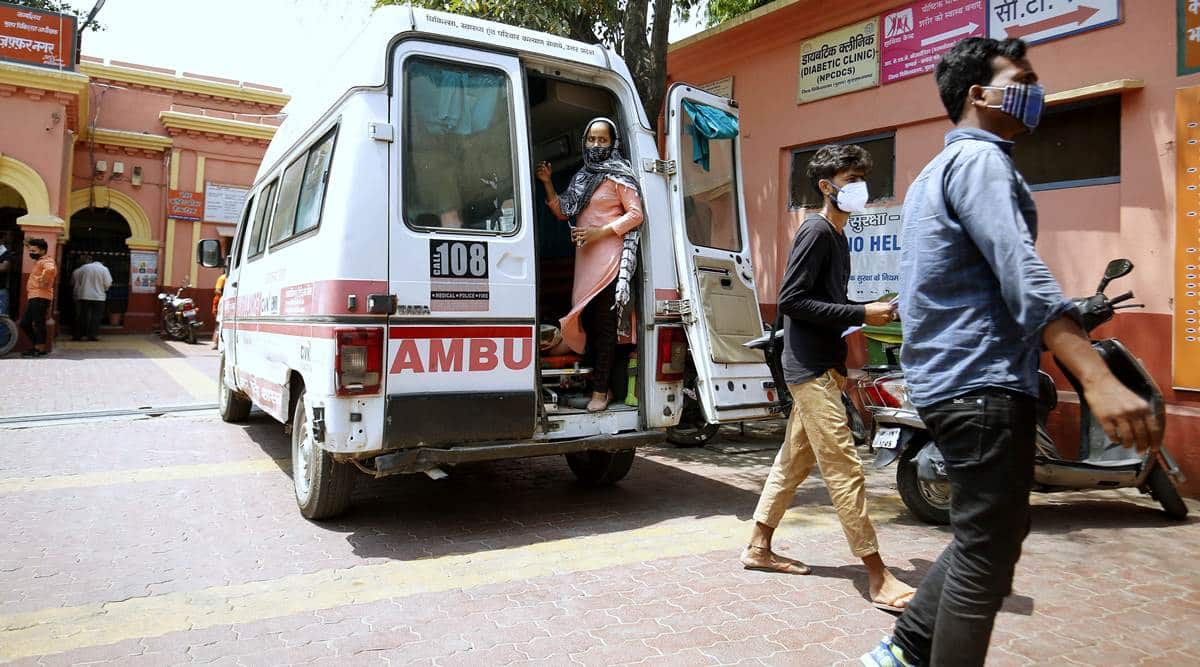 At the Muzaffarnagar district hospital. (Express photo by Praveen Khanna)

Outside the district hospital, the ambulance staffer, Rahul Kumar, pulls aside the patient’s brother. “You stay calm, don’t antagonise them. Let me talk to them,” he says.

Then, he walks up to the nurse. “The patient’s oxygen is very low, 77. Oxygen is there in the ambulance. But it will not last more than a few hours. What should I do?” he asks. The nurse, now calmer, asks, “Is there a Covid-positive report?” Where the family has come from, Almaspur, there is no testing. “This is a case of Covid,” says Kumar. The nurse nods and walks back inside, shutting the gates. Kumar turns to the brother: “We have to wear them down. Don’t worry, I will not abandon you.”

Kumar is 26, with a thin cloth face mask that slips often. He is a government health worker, an EMT (Emergency Medical Technician) who operates the ambulance with a driver. He has no PPE kit, no sanitiser, no gloves, no protection.

“There are Covid ambulances that have all those, mine does not. But these days, when we find a patient with fever and dropping oxygen, we know it’s Covid. I can’t leave them dying. This ambulance isn’t even from here. I was called from Morna, 30 km away,” Kumar says.

Kumar’s parents have begged him to stay home. And he is certain he will contract Covid. “I earn Rs 12,500 a month. That is important for my family. They pray for me. This is the balance sheet of my life,” he says.

About 100 m to the right is an open gate that leads to the wards, making a mockery of the word isolation. There are Covid and suspected Covid patients everywhere — even in the children’s ward and the maternity ward. Next to each is at least one family member, untested for Covid.

Dharmendra Singh, 35, says he will not leave his mother’s side. “It’s a battle,” he says. “The doctors are trying their best, as are the nurses and the ward boys. But they are so overworked. So if the family members leave, you cannot be sure they will get care. We stay by them to ensure they get food. I even buy her biscuits from outside. Keep her spirits up. Keep checking her oxygen.”

It’s past noon, and the workload in the hospital is such that doctors are overworked, nurses have become doctors, ward boys have become nurses, and the families have become ward staff. Singh has no symptoms thus far, and his mask is hanging around his chin. “There are so many people inside this room, at least 20 patients and 30 family members. It is hot and suffocating. I haven’t even stopped to think if I have Covid. If my mother lives, I’ll think about myself,” he says.

In another room, there are at least 20 patients, one doctor and two nurses. The doctor enters, checks on a patient, steps out to write a prescription, moves on. “We need the families here because we can’t handle the numbers. We need hands to listen to instructions,” he says.

Dr Mahavir Lal Faujdar, Chief Medical Officer, Muzaffarnagar, says the administration is trying its best. “We have one medical college in the district, which has 300 beds, of which 197 are occupied. We also have three private hospitals with 50 beds each, all occupied. The district hospital is for isolation, and has an isolation ward,” he says.

Officials say that the district has a total of 120 ICU beds and 42 ventilators.

The isolation ward, Faujdar says, is meant to have 20 beds but “people are more, so there are 10-15 more”. “Patients who have low oxygen saturation, but maybe don’t have a test, we isolate them. We give them oxygen from concentrators, and if they have comorbidities, we treat those. We do a CT chest scan, and if that shows Covid as well, and the saturation is very low, we send them to a level-3 hospital,” he says.

But these are the fortunate ones. At the entrance to Muzaffarnagar town, 6 km away, outside the ITI building, which is doubling up as a oxygen refilling unit, there is a crowd of close to 200 people, tired and angry. Next to each one of them is an empty oxygen cylinder, lined up one after another. Every day for the past week, people have been lining up since early in the morning. It’s a long wait for the gates to open.

Nazim Mohammed has been coming at 5 am every day. Today, he was late and is behind in the queue. “My mother is at Bharat Hospital, and they don’t have oxygen. You have to bring your own. Every day, I come here and wait for hours. Yesterday, I got it at 11 pm, after waiting 16 hours. There is nobody to help,” he says.

“It’s 11 am today, and they haven’t even started. What will happen to my mother? This is the only oxygen refilling plant in Muzaffarnagar,” he says, tears in his eyes. He calls out to a policeman: “Sir, please do something.” The policeman, Jabar Singh, dials a number on his cell phone, and shows it to the crowd. “See, no one’s answering,” he says. By now, there are 168 cylinders in the queue — and 168 lives hanging in the balance.