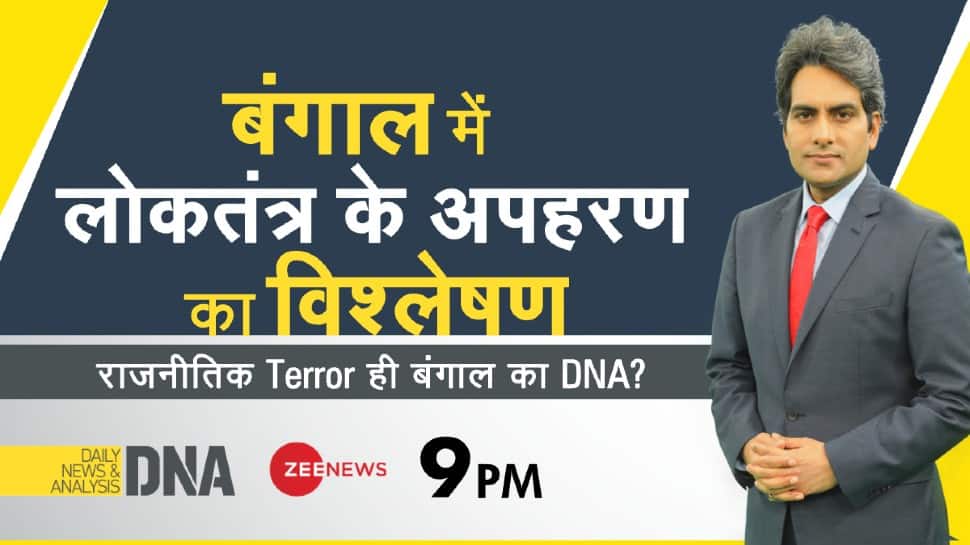 New Delhi: Since TMC’s victory in West Bengal, incidents of violence and arson have been reported in the state. BJP workers and those who voted for the party are reportedly being attacked. There is an atmosphere of fear among BJP workers and an urgent need to put an end to it.

Zee News Editor-in-Chief Sudhir Chaudhary on Tuesday (May 4) discussed the disturbing state of affairs in Bengal following election results and whether there is a need to impose President’s rule to curb the violence.

Since Sunday night, at least 12 people have died in clashes in different areas of the state. The police did not say which party the deceased belonged to. But the BJP has claimed that six of its workers have been killed at the hands of TMC workers.

Today, BJP president JP Nadda reached South 24 Parganas in West Bengal, where he met the family of activists killed in the violence. He held TMC responsible for the violence.

The issue of political violence also reached the Supreme Court, where two petitions were filed today. While one petition demanded the investigation of violence by the CBI the second demanded imposition of President’s rule.

The decision to impose President’s rule in any state can be made under three conditions:

The first condition, which is mentioned in article-356 of our constitution, states that if the President feels that the state government is not working according to the Constitution, then he can impose President’s rule in the state.

Secondly, if a party or coalition is not in a position to form a government even after the elections in the state or the party which is running the government loses majority or the current government resigns then through Article-356 President’s rule may be applied. However, this condition cannot be the basis of the current situation in West Bengal because TMC has won more than a majority of seats.

The third condition states that if the state government does not follow any constitutional order of the Centre and the law and order in the state is serious, then there can be President’s rule. This formed the basis of petition filed in the Supreme Court.

However, it will not be easy to impose President’s rule in West Bengal at this time. Nevertheless, BJP leader Dilip Ghosh has demanded it.

The imposition of President’s rule in any state is demanded by the Governor posted there. The Governor makes a report on it after which the decision depends upon the discretion of the President. As of now, the Governor of West Bengal, Jagdeep Dhankhar,  is deeply concerned about the post-poll political violence.

Today, the Prime Minister also spoke to Dhankhar over phone and expressed concern over the law and order situation in the state. The Governor said that violence and killings in Bengal continue unabated and it is necessary to control it.

Chief Minister Mamata Banerjee today called a meeting at her residence in Kolkata, in which a plan is said to have been made to stop the violence. We hope that after all this bloodbath, Banerjee would finally take strict measures to end this turmoil.