That’s a big nope from him 😂

Ever since he was a puppy, Chester has always been an extremely silly, active dog, and isn’t afraid to make his opinions known.

“He’s a total goofball and always has us laughing,” Chester’s mom (who asked that her name not be included) told The Dodo. “With his constant derping and sassy huffs or side-eye glances, I swear, he’s practically human!” 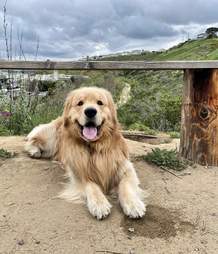 When it’s not too hot out, Chester’s family likes to take him to the beach to run around and play, but they quickly discovered that he has strong opinions about that, too. 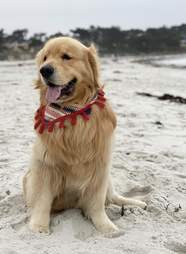 “He’s always been curious but nervous around water — pools, ocean, lakes, baths — you name it,” Chester’s mom said. “The first time we took him was at a beach in Malibu — he would approach the waves but then back away.”

Chester liked the idea of the ocean at first, but as soon as a wave came changing towards him he leapt back, and made it clear that he did NOT want to get his feet wet.

His family couldn’t help but laugh as Chester would run towards the ocean and then quickly leap away. It became the cutest game he didn’t even realize he was playing.

Chester’s family really wanted him to be comfortable around water, since they live in California and there are always opportunities to go swimming or to the beach. They tried giving him some swimming lessons to help build his confidence, and it’s definitely helped a little — but the big waves rushing towards his dry feet definitely still make him a little nervous. 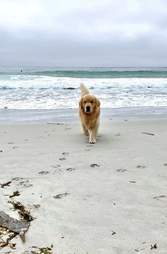 “Now, he’ll go in, but he still hesitates here and there or jumps over the waves (usually a really poorly timed jump),” Chester’s mom said.

Chester definitely has a healthy respect for the ocean and likes running around near it — he just isn’t always a huge fan of getting wet.