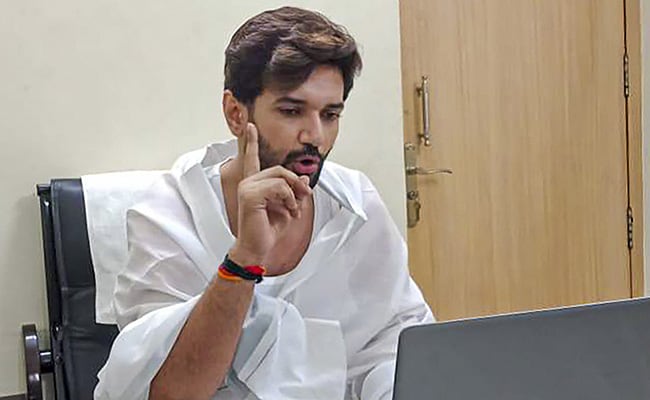 Lok Janshakti Party (LJP) president Chirag Paswan on Sunday said that he welcomed any attack on him by BJP leaders and even by Prime Minister Narendra Modi if it satisfies Bihar Chief Minister Nitish Kumar, but he advised the leaders to “use the words wisely”.

His remarks came a day after BJP leader and Union home minister Amit Shah commented on his “Hanuman of Modi” remark, saying, “LJP president should not harbour any illusions”. Earlier this week, Bihar Deputy Chief Minister Sushil Modi called the LJP “vote-cutters” in an interview to NDTV.

“He (Nitish Kumar) has wasted most of the time to show how LJP and BJP are divided. The Chief Minister is fielding all big BJP leaders to speak against me. I just want to say that they are free to speak against me. I would even say that if the Prime Minister wants to say something against me just to satisfy the chief minister, he can,” Mr Paswan told news agency ANI.

“Nitish Kumar Ji should thank the BJP colleagues that despite all the resentment against the Chief Minister, they are playing coalition religiously and every day they give certificates to Nitish Kumar Ji that they are not with Chirag,” he tweeted.

Mr Paswan again thanked PM Modi for supporting him during his tough phase and inspired him to bring out his ”Bihar first, Bihari first” vision document.

“Prime Minister is in my heart. Prime Minister Modi was standing with me when I was alone outside my father’s ICU. He gave such an honour to my father. Should I forget all that? He has loved like a father, this is my personal belief just like religion,” Chirag Paswan said.

With its 243 assembly seats, Bihar will go to polls in three phases on October 28, November 3 and November 7. The results are scheduled to be declared on November 10. The LJP is fighting the elections separately from the ruling coalition and has said it will not put up candidates against the BJP, however, it will fight against Nitish Kumar’s Janata Dal (United).

(With inputs from ANI)