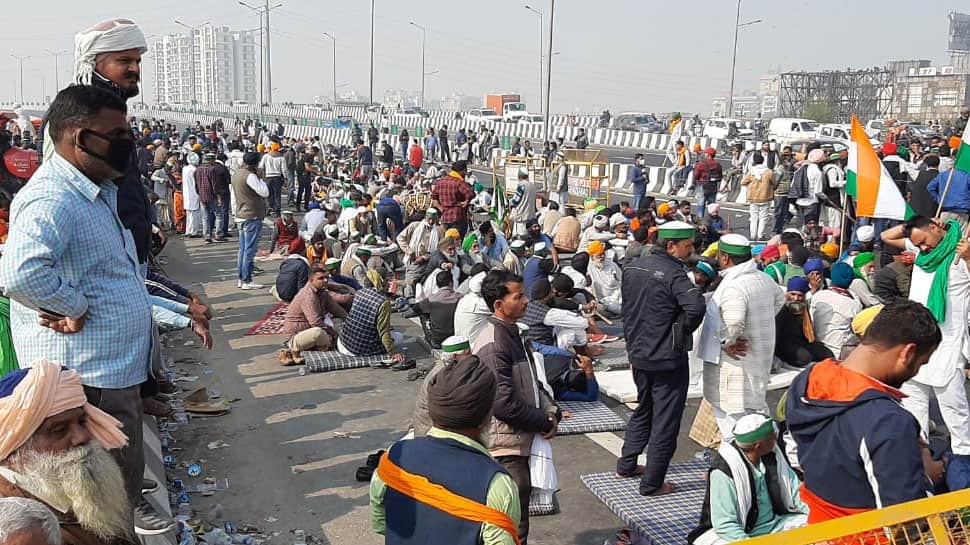 NEW DELHI: A delegation of more than 34 farmer leaders holding the fourth round of talks with the Centre on Thursday demanded a specific law on Minimum Support Price (MSP) as a pre-condition for ending their ongoing agitation against the new farm laws.

The farmer union representatives emphasised that the new law must guarantee them MSP not only now but in the future as well.

The farm unions were also reportedly adamant on demanding the government repealing its three farm laws enacted in September during the Monsoon Session of Parliament. They have also put some other demands on behalf of thousands of farmers owing allegiance to these organisations, huddled under the open sky in the cold winter, refusing to budge until their demands are met.

The meeting, which is expected to play a major role in farmers` future course of action on whether they would continue the protest or withdraw it, is crucial as many of the farmers` demands would lead to new challenges for the government whose focus is to end the farmers` agitation going on since November 26.

Thousands of protesters have blocked five Delhi borders connecting Chandigarh, Haryana and Uttar Pradesh crippling the chain of supply to the national capital. The meeting is also being attended by Union Minister of State for Commerce Som Prakash and Agriculture Secretary Sanjay Agarwal.

The Singhu and Tikri borders, as well as Chilla and Ghazipur borders, have now been hosting these multitudes for over a week. Hundreds of farmers have almost blocked entry and exit out of the National Capital.

The fourth round of meetings with the farmer leaders started at Vigyan Bhawan after the earlier talks remained inconclusive on December 1. In the last meeting, the farmers` representatives had unanimously turned down the Centre`s proposal of a special committee to thrash out the differences and resolve concerns over the farm laws.

A breakthrough was not expected in a single meeting, sources said, in view of the government firmly standing by the laws it has called “historic reforms” in the farm sector. The farmers though have hardened their stance, warning that if on Thursday, “the last chance” for the government to take a decision on the laws, was not taken, the stir could intensify further. In place of a committee, they have demanded a special session of Parliament to repeal what they have called “black laws” made to favour corporate houses.

The meeting between the government and the farmer representative began after a detailed discussion among the Home Minister, Agriculture Minister and the Consumer Affairs Minister at the Home Minister`s residence. Meanwhile, amid the escalating protests around Delhi, spearheaded by farmers from Punjab and Haryana, Home Minister Amit Shah and Punjab Chief Minister Amarinder Singh also met for around half-an-hour.

In a related development, former Punjab Chief Minister and Shiromani Akali Dal (SAD) patriarch Parkash Singh Badal on Thursday returned the Padma Vibhushan award “in protest” against the “betrayal of the farmers by the Government of India” and for the “shocking indifference and contempt” with which the government is treating the ongoing peaceful and democratic agitation of the farmers.

“I am who I am because of the people, especially the common farmer. Today when he has lost more than his honour, I see no point in holding on to the Padma Vibhushan honour,” said the Akali stalwart in his letter to President Ram Nath Kovind.

Badal wrote that betrayal of the farmers by the government like “bolts from the blue on the already beleaguered peasantry of the country” added that “farmer finds himself waging bitter struggles in the severe cold just to secure his fundamental right to live.”

In a letter e-mailed to the President today morning, Badal said, “After panthic ideals of peace and communal harmony, farmers have been my second religious passion.” The government is still holding on to its stance of not rolling back the three farm laws which farmers allege are “anti-farm” and “black laws”.

The three laws that the farmers are opposing are – Farmers Produce Trade and Commerce (Promotion and Facilitation) Act, 2020, The Farmers (Empowerment and Protection) Agreement of Price Assurance and Farm Services Act, 2020, and The Essential Commodities (Amendment) Act, 2020.