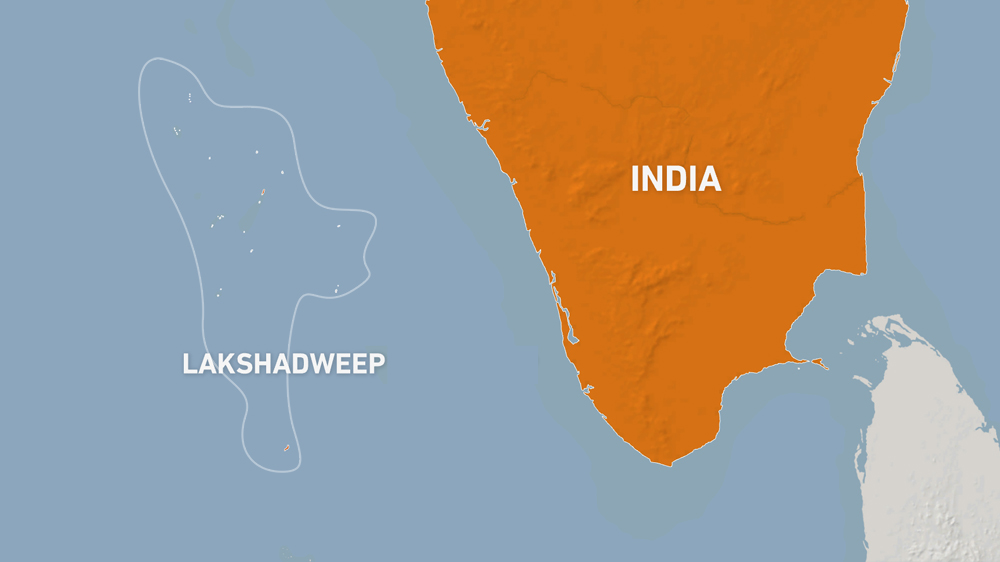 Police in India’s Lakshadweep islands have charged a local filmmaker with sedition after she called the federal territory’s administrator a “bioweapon” being used by the government against the islands’ residents.

The BJP complaint cited a Malayalam TV channel show on controversial government plans in Lakshadweep, during which Sultana reportedly said Modi’s government was using the islands’ administrator, Praful Khoda Patel, as a “bioweapon”.

Lakshadweep Police has registered an FIR against filmmaker Aisha Sultana on charges of sedition and hate speech after she, during a TV debate, said Central government had deployed COVID-19 as a ‘bio weapon’ against people of Lakshadweep

Patel, 63, is the first non-bureaucrat administrator of the Lakshadweep islands and once served as home minister of Modi’s home state, Gujarat, when the Indian prime minister was its chief minister for more than a decade.

The Lakshadweep islands – popular with tourists – are run by an administrator appointed by the Indian president.

Since taking over the Lakshadweep administration in December last year, Patel has pushed through a slew of new laws and proposals – without consulting locally elected representatives – in India’s only Muslim-majority territory apart from Indian-administered Kashmir.

Lakshadweep is an idyllic archipelago of 36 islands – 10 of them inhabited – spread over a 32-square-kilometre area in the sea, about 200km (124 miles) off the southwestern coast of the Indian Peninsula.

It is the smallest among India’s eight “Union Territories” (UTs), with a population of 65,000 people – 97 percent of them Muslims – who now fear losing their land, livelihoods and other rights as the government backs plans to develop the remote archipelago as a tourist hub.

Proposed new town planning laws to make way for tourism, luxury housing and deep-sea mining projects, would give Patel the power to remove or relocate islanders from areas earmarked for development by declaring land as “planning” areas.

Other controversial proposals range from a ban on cow slaughter and allowing more liquor licences, which are seen as offending local Islamic religious sentiment. Currently, the sale and consumption of alcohol is largely banned on the islands.

Other proposals include disqualifying people with more than two children from village council elections. The administration could also imprison any person without trial for up to a year, under Patel’s proposals.

Sultana is among thousands of islanders taking to social media as COVID-19 curbs keep them from taking to the streets to protest.

COVID crisis on the islands

“I had used the word bio-weapon in the TV channel debate. I have felt Patel as well as his policies [have acted] as a bio-weapon,” she wrote.

“It was through Patel and his entourage that COVID-19 spread in Lakshadweep. I have compared Patel as a bio-weapon, not the government or the country …. You should understand. What else should I call him?…”

Lakshadweep had remained coronavirus-free throughout 2020 because of the strict protocol necessitated by its poor health infrastructure with just three hospitals for the 10 inhabited islands.

Patel is accused of exacerbating the COVID-19 crisis in Lakshadweep by changing quarantine protocol in January and allowing anyone entry into the islands with a negative RT-PCR report obtained 48 hours before their travel.

A week after the rules were changed, the territory reported its first coronavirus case on January 17. Until Thursday, the island had recorded over 9,000 cases and more than 40 deaths, according to Maktoob news website.

A Twitter campaign started by students has gained traction on the Indian mainland, with #SaveLakshadweep being backed by prominent politicians including the main opposition leader, Rahul Gandhi.

This week, residents’ group, the Save Lakshadweep Forum, staged a one-day hunger strike to protest against the new land acquisition plans that have stirred eviction fears among the islands’ roughly 65,000 people.

“For generations, we have lived quiet lives, rarely protesting policies created in the mainland… But if they take away my land and home, where will we all go?” fisherman Sakariya, who uses one name, said by phone.

Like many local fishermen, his only asset is the family home his grandfather built on a roughly 1,000-square-foot (93-square-metre) plot of land near the beach, in the island capital of Kavaratti.

“This is not a big city where people can be relocated nearby. For us, it will probably mean having to move to the mainland. How can we allow anyone to take our homes away?” he said.

Protesters also fear the plans could strain the islands’ already limited public services which include a lack of clean drinking water, healthcare and access to the mainland.

Lakshadweep Police files sedition charges against filmmaker Aisha Sultana for saying that the govt deployed Praful Khoda Patel as a ‘bio weapon’ against people. This is an abuse of sedition law. BJP is destroying Lakshadweep & buldozing anyone who raises their voice against it!

Lakshadweep Administrator Praful Patel did not respond to a request for comment, but another senior official – Collector S Akser Ali – told reporters recently the goal was to develop the islands “holistically” with residents’ welfare in mind.

But mistrust and anger towards the Hindu nationalist government in the Muslim-majority territory is widespread.

The authorities’ recent demolition of fishermen’s beach shacks has only fuelled mistrust, said K Nizamuddin, who belongs to the self-governing body in Kavaratti, which is being reimagined in the development plans as a “smart city”.

Nizamuddin said part of the problem was that residents had not been properly informed of the plans.

“We haven’t been consulted and most islanders are clueless about what the future will bring. If drastic changes are coming, they should be told about it,” he said.

“In a smart city, there has to be space for local fishermen and for traditional livelihoods like animal rearing to continue. Instead, authorities have broken fishermen’s sheds on the beach saying it violates norms. So there is mistrust.”

In solidarity with Aisha Sultana. Voices of dissent can’t be suppressed by using sedition. pic.twitter.com/kiwRL9R2z6

Under the draft regulations pushed by Patel, residents would also have to get planning permission before making even minor changes to their homes, said lawyer R Rohith.

“In other regions, it may seem normal for the government to acquire land for projects, like building a road, but in the islands, it is just not done,” Rohith said, referring to laws that aim to protect islanders’ rights and the fragile ecosystem.

Last month, the legislative assembly in Kerala, the nearest mainland state, adopted a motion demanding the removal of Patel and protection for people’s livelihoods.

“We have lived in this small strip of land for decades. We know the impact of disturbing this ecology better than anyone. Officials should listen to us,” said fisherman Sakariya.