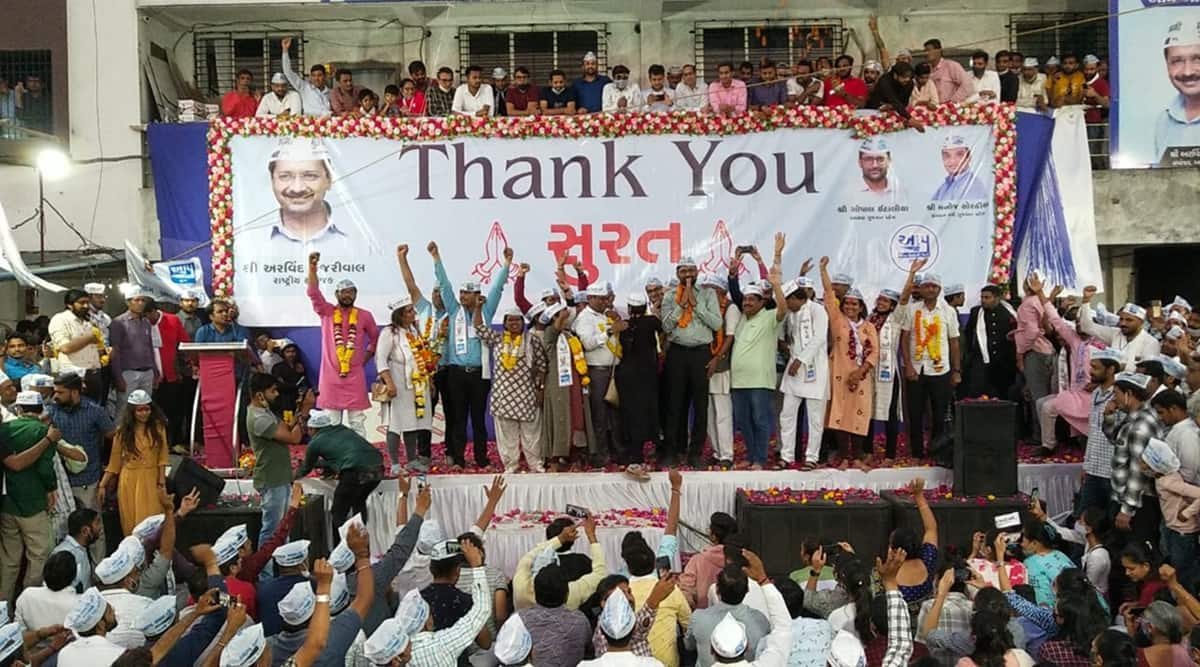 Even as the Bharatiya Janata Party (BJP) retained power in all six Gujarat municipal corporations — results of which were declared on Monday — the Delhi-based Aam Aadmi Party (AAP) won 27 seats in its maiden outing in the state, all in Surat Municipal Corporation. The Congress did not get a single of the 120 seats in the city, where it had gained ground in 2015. The All-India Majlis-e-Ittehadul-Muslimeen, which contested 21 seats in the Ahmedabad Municipal Corporation, won seven, capturing them from the Congress.

General elections to the municipal corporations of Ahmedabad, Surat, Vadodara, Rajkot, Jamnagar and Bhavnagar were held on February 21, where AAP and the All-India Majlis-e-Ittehad-ul-Muslimeen (AIMIM) were contesting for the first time in Gujarat.

Seats went down for the Congress in all the six cities, while in Surat, AAP replaced it as the main opposition. Till around 7 pm, the BJP had won 463 of the 575 seats; Congress had won 44; AAP 27; the Bahujan Samaj Party 3, all in Jamnagar; while one went to an independent.

Union minister Amit Shah took to Twitter to congratulate the ‘people of Gujarat’ for “reinstilling their faith in the BJP’s symbol of development and progress”. Shah, while also congratulating Chief Minister Vijay Rupani, deputy chief minister Nitin Patel and party chief CR Paatil, said “the central and state governments have been working for the welfare of the poor, backward, and deprived sections under the leadership of prime minister Narendra Modi”. He said this huge victory was owing to the ‘niti‘ (policies) and ‘niyat‘ (intent) of the BJP.

Following the election results, Gujarat BJP announced a public function to greet party workers at its Ahmedabad city headquarters in Khanpur. In his first reaction to the party’s victory in the urban local bodies, Rupani thanked all party workers for their hard work and gave an assurance to the people of Gujarat that the confidence imposed on BJP by them will not go in vain.

“The government will leave no stone unturned for the development of the six municipal corporations in the coming days,” Rupani added.

Voting for 575 seats of 144 wards of the six municipal corporations was held on Sunday and the results were declared after counting of votes Tuesday. BJP won a seat in Naranpura ward uncontested.

The six municipal corporations witnessed average 46% voting with Jamnagar recording a maximum voter turnout of 53.38% and Ahmedabad the lowest at 42.51%

In 2015, BJP had won 142 out of the 192 seats in Ahmedabad Municipal Corporation (AMC). Congress had won 49 seats. In Surat, BJP’s numbers had gone down to 80 seats of the 116 while the Congress gained 22 seats in a swing that was largely seen as the impact of the Patidar agitation led by Hardik Patel’s Patidar Anamat Andolan Samiti (PAAS). In 2015 and Congress sat in opposition with 36 seats.

In Vadodara, out of 76 seats, BJP had 58 seats and Congress 14. In Rajkot, by winning 34 of total 72 seats, Congress had given a close fight to BJP which got power with 38 seats.