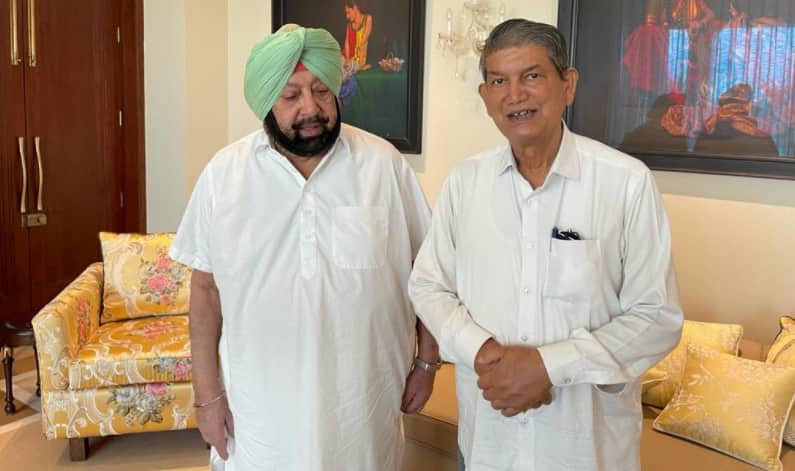 New Delhi: Despite resentment in MLAs against Chief Minister Captain Amarinder Singh, AICC in charge of Punjab Harish Rawat said that the party will contest the 2022 Assembly elections under Captain’s leadership.

Briefing mediapersons after a meeting with a delegation of Punjab Ministers and MLAs at his residence in Dehradun, Rawat said, “We will contest 2022 Punjab elections under the leadership of Captain Amarinder Singh.”

Rawat had earlier said that the party had an idea of turning up of possible issues after the organisation changes in the state unit. He, however, said that Congress will look into the matter and find a solution.

“This thing happens in the party. When we brought in changes in the PCC, we had an idea about possible issues that may turn up. We will find a solution. Everyone trusts Sonia Gandhi and Rahul Gandhi. But suddenly what has happened, why a large number of MLAs are disappointed,” said Rawat, adding “We will look into the matter and try to resolve it.”

A section of Punjab Congress leaders expressed their resentment over Amarinder Singh to party high command, demanding the removal of Captain as chief minister. They reportedly cited his working style is harming the party and the state.

In Chandigarh, Punjab Pradesh Congress Committee general secretary Pargat Singh today clearly stated that there is resentment in MLAs against the Chief Minister.

Briefing media persons, Pargat Singh said, “Due to the non-settlement of issues, there is resentment in MLAs. I suggest the Congress high command under the supervision of AICC observer, the chief minister should call a meeting of all MLAs and decide after discussing with them.”

When asked about the meeting with the party high command in Delhi, Singh said, “Definitely, some people have gone to Delhi and I will also go there. There is no problem with it. We should not divert the issues. Captain Amarinder Singh is our chief minister and we do not disagree with it but work has to be done.”

Notably, the internal feud pours in just days after Punjab CM Captain Amarinder Singh on August 11 raised his concerns in front of Congress interim President Sonia Gandhi regarding the recent statements made by Punjab Pradesh Congress Committee Chief Navjot Singh Sidhu after his appointment to the post.

Amarinder Singh had reportedly `complained` to Sonia Gandhi that Sidhu`s criticism of his government is not good for its smooth functioning and gives a bad impression in the public domain.

Congress leader Navjot Singh Sidhu has been appointed as president of the party`s Punjab unit ahead of Assembly elections due next year. Sidhu`s appointment came after months of infighting in the state unit as the former cricket started had openly rebelled against Captain Amarinder Singh`s government over several issues.

In 2017 Assembly polls, Congress won majority in the state by winning 77 seats and ousted the SAD-BJP government after 10 years. Aam Aadmi Party emerged as the second-largest party winning 20 seats in 117-member Punjab Legislative Assembly, while the Shiromani Akali Dal could manage to win merely 15 seats while the BJP secured only 3 seats.

2021-08-25
Previous Post: Why is it so difficult to find a viable quantum theory of gravity?
Next Post: Assets belong to country, not BJP nor Narendra Modi: West Bengal CM Mamata Banerjee attacks Centre on NMP policy