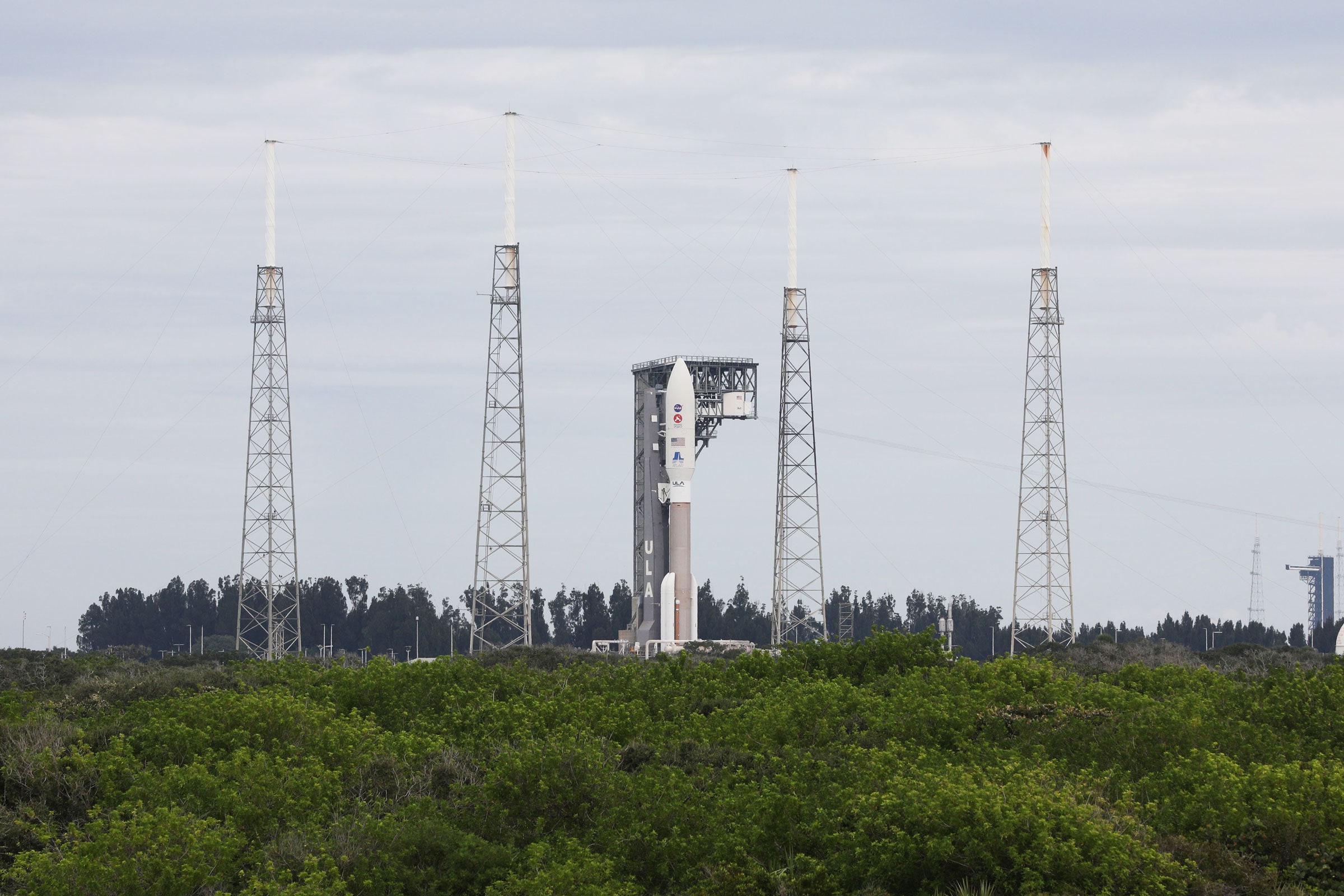 Hitting the atmosphere will also put an enormous amount of strain on the heat shield; it will experience pressures equivalent to being sat on by a jumbo jet. To keep it from cracking, engineers at Lockheed reinforced the heat shield with two-and-a-half inches of honeycombed aluminum that is stiff enough to handle the stress. The atmospheric drag created by the shield serves a braking function and will slow Perseverance to a few hundred miles an hour. Once the craft is about seven miles above the surface—the cruising altitude of a passenger jet on Earth—it will use a small explosive charge to deploy its parachute. Shortly after, the rover will jettison its heat shield. That’s when things start to get truly wild.

When the heat shield clears the spacecraft, the rover will detach itself from the parachute and experience a few seconds of freefall about a mile above the surface. It’s mounted to a so-called skycrane, a rocket powered hovercraft that will guide the rover to a soft landing. The skycrane is outfitted with eight small engines that start firing when the rover is about half a mile in the air to rapidly slow its fall to just a few miles per hour.

“These particular engines are actually a derivative of the original engines developed for Viking landers in the early 70s, but we’ve made very significant upgrades,” says Fred Wilson, a propulsion expert at Aerojet Rocketdyne, the company that made the propulsion system for the Perseverance landing system. For example, the new rocket engines are capable of throttling their thrust over a huge range: They can produce anywhere from eight to 800 pounds of thrust to keep the skycrane in the air. “To my knowledge, that is the largest throttling range of any engine that’s ever been developed and flown,” says Wilson.

During descent, the rover will use a suite of cameras to feed images to machine vision algorithms running on a dedicated computer. These algorithms tell the rover where it is above the Red Planet, and can divert it to a different landing location if it’s off course. Cameras pointed at the parachute and a microphone capturing audio will also record the 7-minute ride to the surface. This means Earthlings will eventually get to see the first-ever Martian landing sequence from a rover’s point of view. (It won’t be in real time, of course; it takes 20 minutes for a signal to reach Earth from Mars, and Perseverance’s computers will be focused on more important things—like not getting destroyed.)

When the skycrane is about 25 feet off the ground, its retrorockets will keep it and the rover hovering in one spot. The skycrane will then unspool the ropes that connect it to Perseverance and gradually lower the 2,000-pound rover to the surface. Once the rover’s wheels are on terra firma, explosives will sever the ropes and the skycrane will fly a few hundred feet away from the rover and make a crash landing.

Perseverance will touch down in Jezero Crater, which planetary scientists believe may once have been an ancient Martian river delta. If there was ever life on the Red Planet, this crater is the type of place where they expect to find it. The rover will spend its first few months on the Red Planet communicating with mission control back at NASA’s Jet Propulsion Laboratory to make sure all of its systems are working. It should be ready to begin its primary mission sometime in March or April.

But before it goes looking for signs of microbial Martians, Perseverance will have to drop off its own passenger: an autonomous helicopter called Ingenuity. It’s a small rotorcraft the size of a commercial drone that’s attached to the rover’s belly and is expected to become the first aircraft to fly on another planet. The chopper will only spend a month making up to five short test flights, but they’ll provide NASA engineers with valuable data that will guide the design of bigger aircraft for future Mars missions. Why Do Razor Blades Dull So Quickly?