Japan is expected to announce a state of emergency later on Tuesday amid a spike in coronavirus cases, as Singapore began a partial lockdown and other countries extended stay-at-home orders to curb the spread of the disease.

In the UK, Prime Minister Boris Johnson, who was diagnosed with coronavirus late last month, was moved to intensive care in a London hospital after his condition worsened on Monday evening.

Foreign secretary Dominic Raab will be leading the UK government response to the coronavirus while Johnson is in hospital.

In Europe, there are indications that the pace of infections in hard-hit Spain and Italy is slowing, although the death toll continues to rise.

Globally, the number of people diagnosed with the virus now exceeds 1.3 million. More than 74,500 people have died while nearly 285,000 have recovered, according to data compiled by Johns Hopkins University.

Here are the latest updates:

The number of coronavirus cases in Russia rose by more than 1,000 for the first time to reach 7,497 in the past 24 hours, the country’s crisis response centre said.

British Prime Minister Boris Johnson, who spent the night in intensive care with a deteriorating case of coronavirus, has been given oxygen but is not on a ventilator, a minister said.

“The prime minister has received some oxygen support,” senior cabinet minister Michael Gove told LBC radio, adding that “he has not been on a ventilator” but it was there if needed. 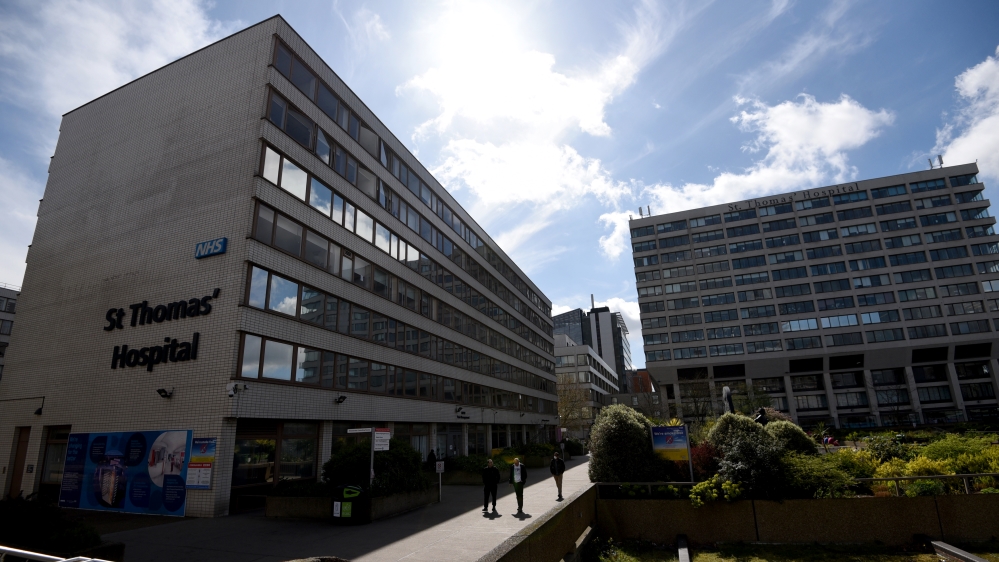 Finland’s government has extended and tightened border controls restricting travel to and from the country until May 13 in order to contain the spread of the novel coronavirus.

Finland has followed with mounting concern neighbouring Sweden’s liberal pandemic strategy, fearing cross-border commuters could speed up the spread of the virus in northern parts of Finland with an ageing population and limited intensive care resources.

“The government’s aim is to further reduce movement in the inherent commute area across the borders with Sweden and Norway,” Finland’s government said in a statement.

“As we speak, the prime minister is in intensive care, being looked after by his medical team, receiving the very, very best care from the team at St Thomas’ and our hopes and prayers are with him and with his family,” Gove told BBC television.

Abandoned when Pakistan’s largest cities went into lockdown, hundreds of caged cats, dogs and rabbits have been found dead inside pet markets hurriedly shuttered as the coronavirus spread.

Animals still alive in the corner of Karachi’s sprawling Empress Market were rescued only after activists appealed to the authorities for access, AFP news agency reported.

“When we got inside, the majority of them were dead, about 70 percent. Their bodies were lying on the ground,” Ayesha Chundrigar, who runs ACF Animal Rescue, told AFP.

Dubai, the commercial hub of the United Arab Emirates, has extended the closure of commercial activities until April 18 as part of efforts to contain coronavirus, the Dubai Economic Department said in a statement on Twitter.

During this period, sectors exempted from the lockdown will operate as usual, the statement said.

Dubai announced a two-week lockdown starting on April 4 at 8 p.m. (1600 GMT) to disinfect the emirate and contain the coronavirus. 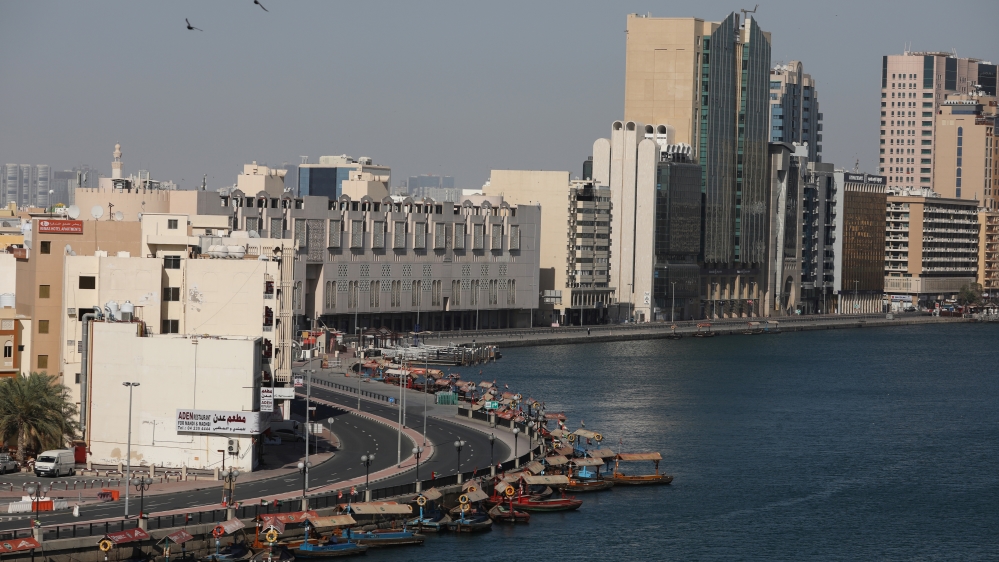 Germany’s confirmed coronavirus infections rose by 3,834 in the past 24 hours to 99,225, rising again after four consecutive days of drops, data from the Robert Koch Institute for infectious diseases showed.

There has been no change in Boris Johnson’s condition, two sources close to him said on Tuesday, after the British prime minister was taken into intensive care following a deterioration in his coronavirus symptoms.

Johnson was given oxygen on Monday and taken to an intensive care unit at a central London hospital in what Downing Street said was a precautionary measure after his condition had worsened.

Hello. This is Saba Aziz in Doha, taking over from my colleague Kate Mayberry in Kuala Lumpur.

I will shortly be handing over the blog to my colleagues in Doha.

Before I go a brief summary of the morning’s developments:

Japan’s government is finalising its biggest-ever stimulus package worth 108 trillion yen ($990bn) – equal to 20 percent of economic output – to cushion the effect of the coronavirus pandemic on the country’s economy.

The measures are expected to include cash payouts to households and small businesses as well as deferred tax payments.

More on that story here.

Singapore’s government has tabled a bill to ensure that if a general election were called during the COVID-19 outbreak, it could be held safely.

The city-state began a month-long partial lockdown on Tuesday to try and curb a sharp rise in coronavirus cases and does not have to go to the polls until early 2021.

However, the government, which controls nearly all the seats in parliament, has said it is not ruling out holding the ballot before the deadline.

Some opposition parties have said would be a health risk.

The Elections Department said the temporary arrangements would the “ensure the safety of voters, candidates and election officials, should the next General Election (GE) take place amid the COVID-19 situation.”

World leaders, including US President Donald Trump, have been sending their support to British Prime Minister Boris Johnson after the 55-year-old was taken into intensive care in a London hospital.

More on that story here.

New Zealand’s Prime Minister Jacinda Ardern has demoted the country’s health minister for breaching nationwide lockdown rules but rejected his offer to resign because it could jeopardise plans to curb the spread of the coronavirus.

Health Minister David Clark drove his family to the beach in the early stages of a lockdown that started in late March.

“Under normal conditions, I would sack the minister of health. What he did was wrong and there are no excuses,” Ardern said in Wellington.

Instead, she demoted Clark to the bottom of cabinet rankings and stripped him of his role as associate finance minister.

“I expect better and so does New Zealand,” she said.

Clark said in a statement that he had been “an idiot”.

Like many other people cooped up in their homes during coronavirus lockdowns, South Koreans have turned to delivery – for basic supplies, meals and other goods.

Delivery drivers like Ha Woong, already required to make super-fast deliveries, now find themselves with even more work. And this is taking a toll on their health.

But their push for better working conditions is on hold.

Kelly Kasulis has more on the story here.

Human Rights Watch is urging the Philippines to reduce the number of inmates in its jails amid concerns of a “serious outbreak” of the coronavirus in the world’s most overcrowded prisons.

It called on the authorities to release those detained or convicted for low-level and non-violent offences.

The Philippines President Rodrigo Duterte has extended the lockdown of the country’s main island of Luzon, including Manila, until the end of April.

The measures were due to come to an end next week and cover more than half the population of the Philippines. Many of Manila’s poorer residents were already struggling.

Anies Baswedan, the governor of Jakarta, has been given the Health Ministry’s approval to impose strict social restrictions in the Indonesian capital, according to detik.com and other Indonesian media.

A Health Ministry official told Reuters news agency, however, that the ministry had yet to give its approval for the measures.

Japan’s Prime Minister Shinzo Abe is expected to announce a state of emergency later on Tuesday covering Tokyo and six other prefectures.

Abe’s due to speak to the media at 7pm (10:00 GMT) after discussions with a panel of experts.

The government is also planning to finalise a stimulus package worth 108 trillion yen ($990 billion) – equal to 20 percent of Japan’s economic output.

“Japan and countries overseas and facing their biggest crisis in recent years because of the coronavirus outbreak,” Chief Cabinet Secretary Yoshihide Suga said on Tuesday.

China’s National Health Commission has reported no new coronavirus deaths for the first time since it started publishing figures on the virus late last year.

The milestone comes as the country prepares to lift all travel restrictions on Wuhan, the city where the virus first emerged at a seafood market late last year.

After a 76-day lockdown, #Wuhan, the hardest-hit city by #COVID19 outbreak in #China, will lift its outbound travel restrictions on Wednesday. As the city is preparing to spring back to normalcy, disinfection work in transportation hubs is currently in progress. pic.twitter.com/F3SRjgSb69

Latest data shows 32 new cases of coronavirus nationwide, all of them imported.

There were also 30 new asymptomatic infections bringing the national total to 1,033. About a quarter of those were also imported from overseas, the commission said.

Save the Children has launched a $100m appeal – its biggest ever – to help children and their families in some of the world’s most fragile nations during the coronavirus pandemic.

“The pandemic is now spreading across the world’s poorest countries further crippling health systems where children are already missing out on life-saving treatment for malaria, pneumonia and malnutrition,” Save the Children’s Chief Executive Inger Ashing said in a statement. “It will leave many children without caregivers, out of school and in danger. We only have a matter of weeks to take swift action that will determine how many lives we can save.”

Save the Children estimates about 1.5 billion children around the world are out of school, which in poorer nations could increase the risk of them being forced into work or marriage, it said.

The UN Security Council is expected to hold its first meeting on the coronavirus pandemic on Thursday,  diplomats have told AFP news agency.

“Meeting confirmed for Thursday,” one diplomat told AFP news agency on condition of anonymity. It was to be held behind closed doors at 3pm (19:00 GMT).

Nine of the 10 non-permanent members formally requested a meeting with a presentation by Secretary-General Antonio Guterres, last week.

Last week, the UN General Assembly adopted by consensus a resolution calling for “international cooperation” and “multilateralism” in the fight against COVID-19 – the first text to come out of the world body since the outbreak began.

You can find all the updates from yesterday (April 6) here. 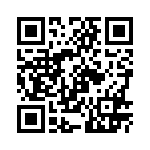