He found just the people to help ❤️

To see Bruno now, happy and loved in his new forever home, you’d never guess there was once a place he’d been unwelcome.

The other day, Lujan Videla and her boyfriend were walking near their home in Argentina when they spotted a dog they’d never seen before, standing by himself on a street corner. It was Bruno.

“He was so alone and disoriented,” Videla told The Dodo. “I told my boyfriend to stay with him and to wait to see if his owner would appear.”

But no one ever came. 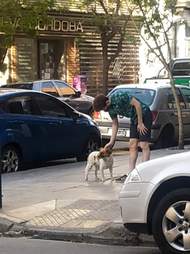 After a time, Bruno began to walk — leading Videla and her boyfriend to the door of an apartment building.

“We followed him, and noticed that he wanted to enter the building,” Videla said.

There, they were met by a sign posted on the door.

Talking to a resident of the building, Videla and her boyfriend came to learn that, up until recently, Bruno had lived there with an older man. It’s believed that the man may have passed away, or was forced to move out suddenly.

Somewhere along the way, Bruno found himself alone without a home — a fact that was lost on him. Though some residents had taken pity and began feeding him out front, he was so determined to enter the building that management had made the sign so no one would let him in.

“It makes you realize how indifferent people can be,” Videla said. “Bruno was so sad. He was desperate to enter.”

Videla and her boyfriend decided to help. 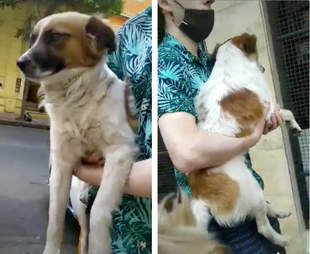 After taking Bruno home with them, Videla and her boyfriend spread the word about him, just in case his former owner, or the man’s family, was trying to find him. But to no avail. It was then they realized just how heartbroken Bruno was.

In the first few days, after his hopeless vigil at the door had ended, the reality of his loss seemed to sink in.

But things soon got better. 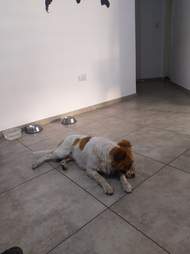 Surrounded by his rescuers’ love and care, Bruno’s broken heart began to heal.

“The days went by and his face changed,” Videla said. “He began to be happy.”

Having several rescue dogs already at home, Videla and her boyfriend were unable to take Bruno in as their own. But they did the next best thing.

They found him a forever home.

“He was adopted by a very trustworthy person who lives across the street from where I live,” Videla said. “We go on walks together. He is very happy.”

Videla is still bothered by the fact that the apartment building’s management didn’t do more to help Bruno, but she hopes his experience will inspire more compassion for pups like him.

“Some people don’t realize that they are living beings that feel the same as us,” Videla said, adding that now: “Bruno’s like a whole new dog.”