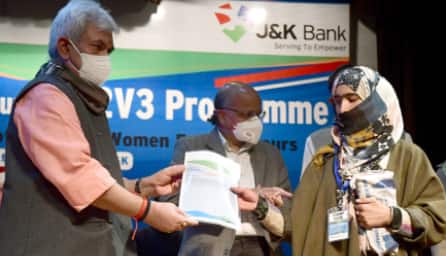 Jammu: Lieutenant Governor Manoj Sinha on Tuesday (October 27) announced the sanctioning of over 10,000 cases under B2V3 Self-Employment Programme, Economic Package and My Town-My Pride, while addressing the media persons at Raj Bhavan auditorium.

The press conference also witnessed the announcement of some major reforms in the business sector, giving a determined push to the business revival and economic development of Jammu and Kashmir, besides empowering youth and women entrepreneurs, making a positive impact on self-employment.

The Lt Governor observed that his mantra for J&K revolves around 4 Ps viz Peace, Progress, Prosperity and People first. He further said that the sanctioning of over 10,000 cases under B2V3 Self Employment Programme, Economic Package and My Town-My Pride highlighted the UT government’s commitment to empowering the youth which is one of the foremost priorities of J&K government.

A total of 15309 applications were received, out of which 10828 have been sanctioned and an amount of Rs 100 crore has been disbursed to 6734 applicants, identified under B2V3.

Manoj Sinha said, “We had taken up a target of covering at least 2 persons in each Panchayat who were in need of financial assistance for self employment,” adding “I am happy to announce that we have covered nearly 10,000 cases and in order to mark the occasion, one person from each district of J&K is being handed over a sanction letter here.”

“We stand committed to cover every single aspirant within the Union Territory of J&K, who wishes to set up his own business. What distinguishes the effort this time is the fact that unlike in past, where borrowers had to make several rounds of the bank to get a simple loan, the banks have been more than forthcoming towards helping the people,” the LG said.

The officers went to the villages under B2V3 and My Town My Pride, and identified the aspirants. The officers from the bank also attended these events and in a departure from the normal culture of red-tapism, we have been able to sanction these cases within a short period of time, which is reflective of our resolve to help the young generation in achieving their aspirations, he continued.

He called upon the J&K Bank to not only extend financial assistance to these entrepreneurs but also provide handholding to them so that the youth who opt for self-employment can set up sustainable businesses and flourish in their lives. The LG also handed over a cheque of Rs 250 crore to J&K Bank as the commencement of disbursement of 5% Interest Subvention and coverage of re-structured accounts of 2014 and 2016 and termed it as a very important milestone.

“This is only the beginning and as and when requests are received for further disbursement, we will continue to meet these requests in a timely manner,” he added.

Providing a much-needed relief to the business community, the Lt Governor also announced that from 1st January, GST shall be reimbursed timely and automatically, without delays.

Reiterating the government’s commitment for taking comprehensive measures for the revival of the business sector, Sinha observed that the committee had been constituted under the Chairmanship of KK Sharma, Advisor to the Lt Governor to suggest measures for improving the competitiveness of local industry post abrogation of toll tax at Lakhanpur.

The committee was supposed to give its report within a month of the announcement of economic package. I am happy to announce that the committee has given its report within the scheduled time and the Government will soon commence the implementation of recommendations, observed the Lt Governor.

He said, “These recommendations contain 20 key steps that will not only enable the industry to become competitive but also flourish in times to come and become competitive not only in this region but also at the national level,” adding “I believe that this is a comprehensive set of measures and these 20 measures are expected to go a long way in meeting the aspirations of the local industry which have been looking for support from the government.”

Speaking on the Economic package, he observed that the economic package announced had 83 measures. “I had also said that the implementation of the package shall be personally monitored by me. I am happy to announce that nearly 50% of the recommendations have already been implemented, he added.

Sinha further said, “With all these innovative measures, we are progressing towards creating a better socio-economic ecosystem in J&K, and the implementation of the economic package shall be further intensified in times to come.”

Strengthening the grassroots democratic setup, 3-tier Panchayati Raj System is being implemented for the first time in J&K, thereby giving further fillip to the developmental agenda centered around people’s welfare, he added.

He said “My Government is committed to peace and progress in J&K. As you have seen, we had announced the economic package about a month ago and we have been able to make progress on nearly 50% of the measures under the economic package. We mean what we say”, said the Lt Governor.

For empowerment of youth of J&K, the UT Government is coming up with YES J&K- a Youth Empowerment programme for Youth Engagement and Employment. The intended programme will be an institutional mechanism for providing the necessary handholding and support to the youth to facilitate and nurture their capabilities, he added.

The government is aiming to operate youth engagement programmes in the field of Sports, Livelihood generation, Recreation, Education, Counselling to effectively support and encourage young individuals to shape their future as per their aspirations, observed the Lt Governor.

On employment generation, the Lt Governor said that 24,000 posts have been identified in different departments, with 10,000 posts already advertised, across the UT for recruitment, which will be filled up soon.

“We will continue to march ahead. We will spare no efforts to ensure that the Government of J&K comes up to the expectations of the people,” the LG added.