Eight hundred consecutive weeks. That’s how long Rafael Nadal has been living inside the Top 10 of the FedEx ATP Rankings. His run has spanned more than 15 years and counting: 5,600 days. 134,400 hours. The Mallorcan’s streak has already lasted longer than the Napoleonic Wars or World War I, World War II, and the American Civil War combined. By the time he’s done, look out Thirty Years’ War.

Nadal broke Jimmy Connors’ mark of 789 consecutive weeks in the Top 10 in November and shows no signs of relinquishing a perch that’s become so familiar, he could almost be charged rent for the space. The last time there were two digits higher than 10 next the man’s name in the rankings, Facebook was a year old, Twitter and Instagram hadn’t been invented, no one had ever heard of Kim Kardashian and Justin Bieber was a tween busking for coins on the streets of Stratford, Ontario. 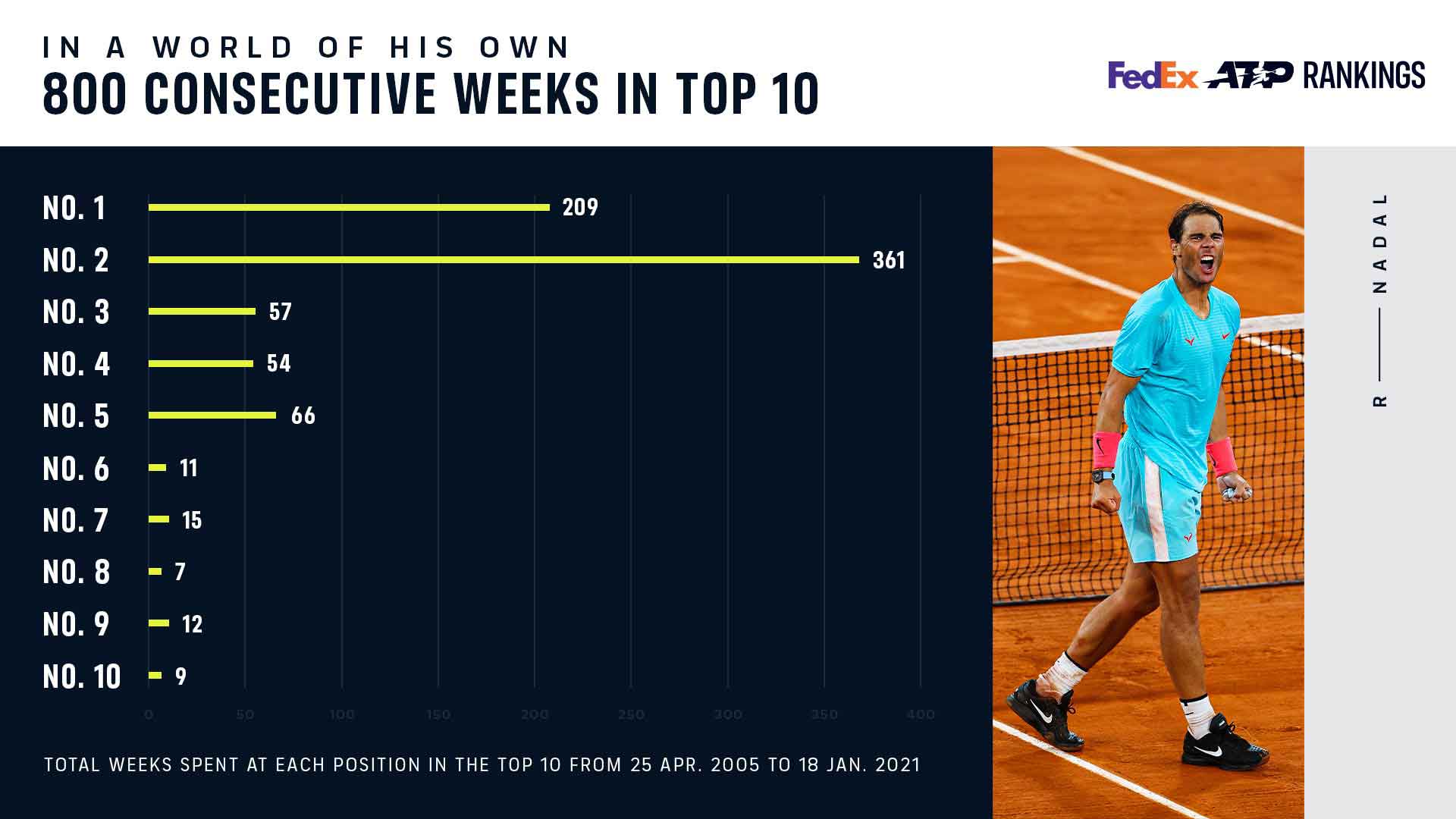 Nadal first broke into the Top 10 in April 2005 at the age of 18, a month before capturing his first Roland Garros title. For much of the next 15 years he was No. 1 or No. 2, though there were a few close calls, particularly when he was injured, when he nearly dropped out of the Top 10. For example, in the summer of 2015 he lived dangerously at No. 10 but slid no further south, and in the winter of 2016-17, he dipped to No. 9 but was No. 1 by the end of the year. When he needed to, he got medieval on rivals who threatened his own personal safe space: the Top 10.

Whenever his ranking has suffered, he’s elevated his game. Nadal once said that doubting himself was an important part of his success. “I think it’s good for me (having doubts) because then I feel alert,” he told Jon Wertheim of the television program 60 Minutes in July. “Because tennis is a sport where things can change very quickly.” He’s been in the Top 10 for what seems like forever, but his conviction that things can change quickly is the ethos that will likely keep him there for years to come.

Naturally, any discussion of records involving a member of the Big Three begs the question: Where does Rafa stand relative to Novak Djokovic and Roger Federer? Roger’s right behind Connors in the record books for his 734-consecutive-week run in the Top 10 from October 2002-October 2016. It was his right knee, and not the competition, that knocked him down to a shocking — for him — No. 17 in the rankings that winter.

Djokovic had a decade-long run in the Top 10, from 2007-2017 that was disrupted by an elbow injury. He re-entered the Top 10 in July 2018 and has been there since. This means that he’d need to stay there until 2033, when he’ll be 46, to approach Nadal’s record. How about Fed? He muscled his way back into the Top 10 in January 2017, so he could get there a year sooner, when he’ll be 51. One never likes to count out the likes of Federer and Nole, but sorry gents, this is one record they will not break.

What’s the next rankings target for Rafa? Federer has spent the most weeks overall in the Top 10 of the FedEx ATP Rankings with 931 weeks, followed by Connors (816), and then Nadal (800). Djokovic is currently in sixth place at 656 weeks.

Will Rafa hit 1,000 consecutive weeks, which is more than 19 years? The Spaniard could hit that target at the end of 2024, when he’ll be 37. It’s certainly possible. Cats ran on Broadway for 18 years and Nadal’s a much better show than that ever was.

When asked at the Rolex Paris Masters last year how he’s managed to stay on or near the top for so long, Nadal was characteristically thoughtful and humble.

“I’ve faced issues in terms of injuries during different parts of my career,” he said. “But I always hold the passion and the love to keep doing what I do, which is to play tennis. So I’m proud that even after achieving a lot of things, that in some moments I’ve been able to keep being hungry, to keep going, and to be humble enough to accept the challenges, accept that in some moments things were not going the way that I expected. I’ve always had great help from the people around me. Without them, this would be impossible.”