Noida: In light of the recent increase in the number of COVID-19 cases, the Gautam Budh Nagar administration on Thursday (April 8) imposed a night curfew in the entire district including Noida.

The curfew will be in effect from 10 pm to 5 am in morning every day till April 17.

The order was issued by the Office of District Collector and Magistrate Gautam Budh Nagar.

However, all movement essential goods/commodities and essential/medical services shall be exempted from restrictions. 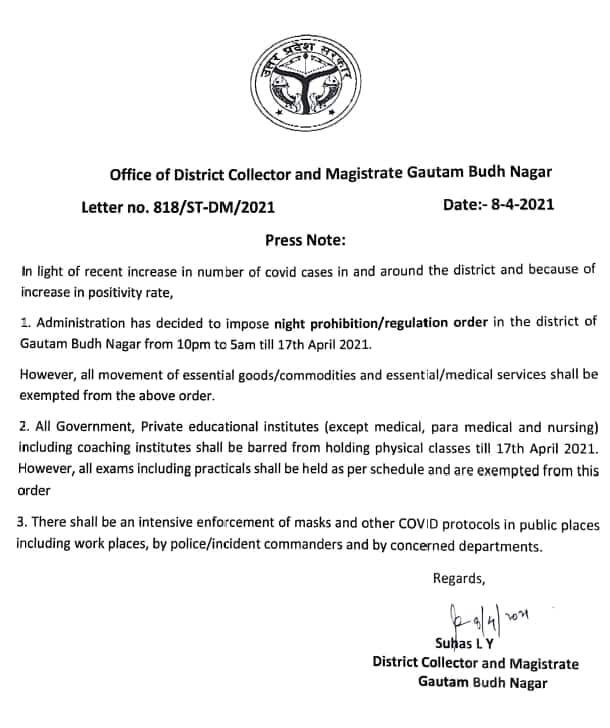 The order also said that all government and private educational institutes and coaching centres would be barred from holding physical classes till the restrictions are in place. However, medical, para medical and nursing institutes will be allowed to continue.

The Yogi Adityanath-led government in Uttar Pradesh has announced several restrictions and issued new guidelines to curb the spread of the deadly virus.

Accordingly, a night curfew has been imposed in major cities including Lucknow, Kanpur and Varanasi with effect from Thursday night.

While the night curfew has been imposed in Lucknow at 9 pm and 6 am, it will come to force between 10 pm till 6 am in Kanpur. On the other hand, Varanasi will observe a week-long curfew starting at 9 pm from April 8.

Uttar Pradesh reported 40 coronavirus fatalities, the highest in recent weeks, and 6,023 new cases on Wednesday, pushing the toll to 8,964 and the tally to 6,45,930. The 40 new fatalities in the state include six from Lucknow, five from Kanpur, four from Ballia, three each from Allahabad and Varanasi, and two each from Moradabad, Ghazipur, Amroha and Fatehpur, according to a health bulletin.