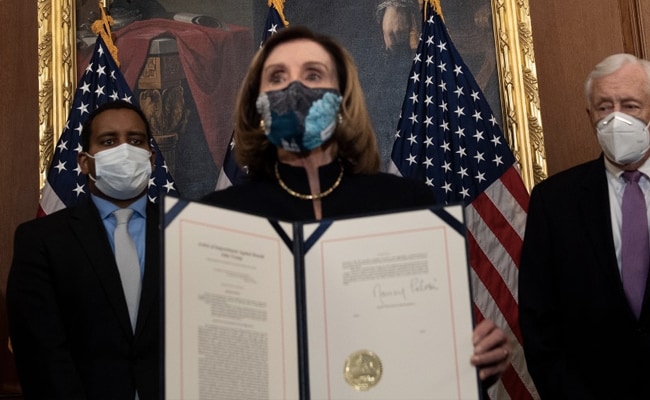 Trump’s impeachment confirmed that “no one is above the law”, said Nancy Pelosi. (FILE)

Donald Trump’s impeachment Wednesday confirmed that “no one is above the law,” US House Speaker Nancy Pelosi said after the defiant Republican president was impeached for the second time in 13 months.

“Today in a bipartisan way the House demonstrated that no one is above the law, not even the president of the United States,” the top Democrat in Congress said at a ceremony at which she signed the article of impeachment.

Trump, 74, was impeached for “incitement of insurrection” after he exhorted his supporters to march on the US Capitol and “fight,” leading to a mob storming the seat of American democracy.

(This story has not been edited by NDTV staff and is auto-generated from a syndicated feed.)

CBI suspends its inspector, stenographer involved in case of alleged bribery, writes to DoPT to take action against two DSPs