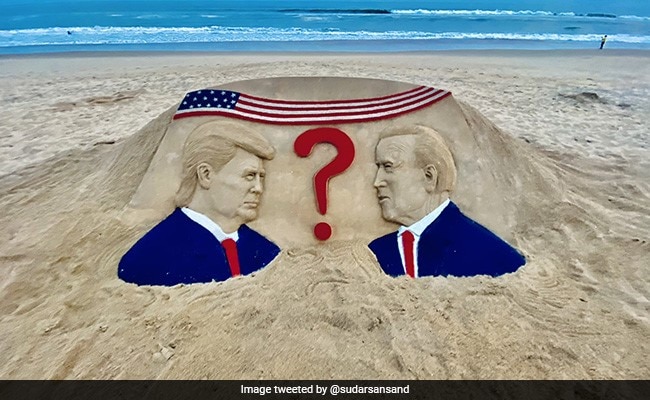 With neither incumbent President Donald Trump nor his opponent Joe Biden yet receiving a clear majority in the US Elections, renowned sand artist Sudarsan Pattnaik highlighted the dilemma of millions who are waiting eagerly for the final result on Friday.

Mr Pattnaik later also shared a photo of the sand art on his official Twitter handle, with a caption that read “#US Election 2020”.

The work which stood near a sea beach in Puri, shows both Trump and Biden standing face to face while a question mark, highlighting the lack of clarity about the winner, is placed in between the two. Flying above the two leaders a US flag too has been created by Mr Pattnaik.

Meanwhile, while the US awaits the final results of the votes cast on November 3, President Donald Trump on Friday attacked Twitter for being “out of control” and claimed that he could “WIN the Presidency of the United States with LEGAL VOTES CAST”.

Taking to Twitter, Trump said, “Twitter is out of control, made possible through the government gift of Section 230!”

In another tweet, he alleged that the observers were not allowed to “do their jobs” and hence the votes cast during this time should be “determined to be ILLEGAL VOTES”.

“I easily WIN the Presidency of the United States with LEGAL VOTES CAST. The OBSERVERS were not allowed, in any way, shape, or form, to do their job and therefore, votes accepted during this period must be determined to be ILLEGAL VOTES. US Supreme Court should decide!,” Trump said.

This is not the first time Trump has demanded the votes cast be considered illegal.

During a press conference on Thursday (local time), Trump said: “If you count the legal vote, I easily win. If you count the illegal votes, they can try to steal the election from us….I have already won many critical states… massive victories in Florida, Iowa, Indiana, Ohio, to name just a few. We won these and many other states despite historic election interference from big media, big money, and big tech… We won by historic numbers.”

On Thursday (local time), Trump’s election campaign filed a new lawsuit against Philadelphia election officials for allegedly violating their due process rights by blocking the observation of ballots in the city.

Earlier, Trump’s election campaign had filed a lawsuit to stop ballot counting in Michigan and Pennsylvania and to prevent the counting of absentee ballots in Georgia that it claims arrived after the deadline on Election Day.