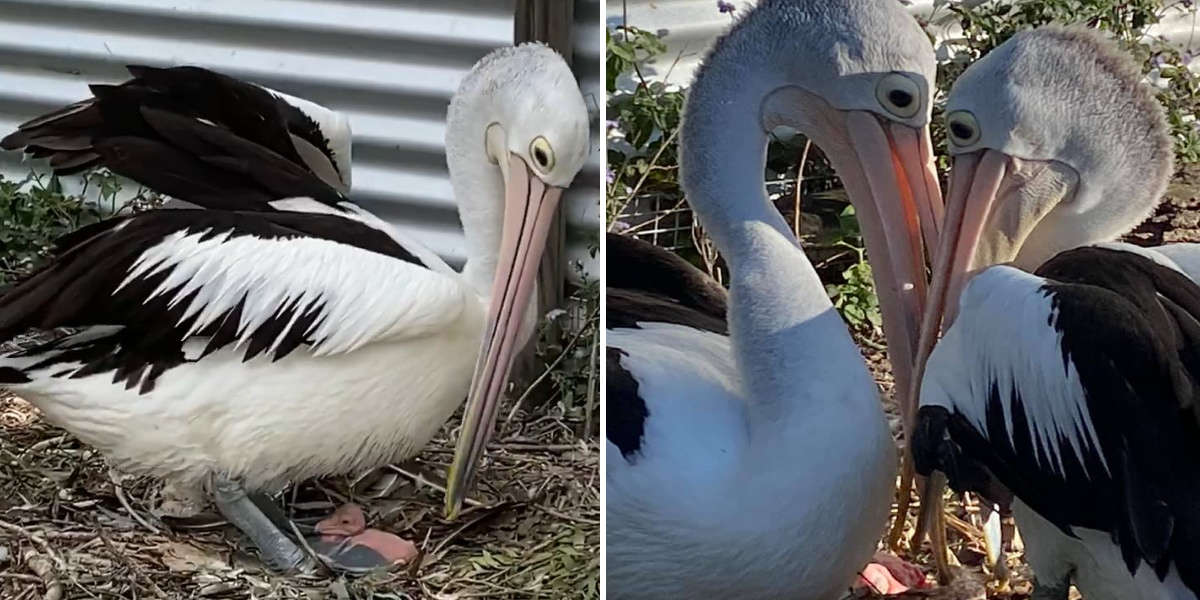 “[They] are in love with their newborn pelican chick” 💞😭

For six years, Mr. Percival and his partner have nested and cared for their eggs at Twinnies Pelican and Seabird Rescue in Australia. Mr. Percival dutifully sat on his eggs, sharing the month-long incubation period with his partner, hoping for a baby. But none of his eggs hatched.

This all changed in September when the carers at Twinnies placed a fellow pelican’s egg in Mr. Percival’s nest.

“Mr. Percival has never given up trying to have a baby pelican chick,” Twinnies wrote on Facebook. “We felt so sorry for him as it’s so sad when he’s seen the others around him seeing baby pelicans. So we did this amazing thing for him as we wanted to make him really happy this time.”

Australian pelicans breed in colonies, typically laying between one and three eggs a year. Their chicks are born blind and naked and rely entirely on their parents for food and warmth.

When Mr. Percival’s adoptive egg finally hatched, his carers could see how excited he was to be a new dad. “Mr. Percival was proud as punch,” Twinnies wrote on Facebook. “He made us cry. As you can tell, he and his partner are in love with their newborn pelican chick.”

In the weeks since his baby’s birth, Mr. Percival has shown himself to be a devoted dad — splitting the feeding and nesting duties with his partner.

“We are so proud of him as we can see the baby pelican chick is growing beautifully,” Twinnies wrote in a Facebook update. “Mr. Percival goes for a swim and catches little fish then he feeds his little one.”

Mr. Percival has a special bond with his carers, who have tended to him for 18 years.

They first came across the young pelican on Chambers Island in Maroochydore, Queensland. He would constantly get entangled in fishing lines and hooks and need help. They continued to come to his aid in the wild until Mr. Percival lost a wing due to a severe injury, and his carers applied for a special permit to bring him to the safety of the sanctuary.

Now, Mr. Percival is experiencing fatherhood for the first time and he’s never happier than when he’s with his baby.

“His behavior is just amazing,” Twinnies wrote on Facebook. “[He’s] been doing a lot of pelican talk to us, as he knows we’re so happy, too.”

“This is true love for our Mr. Percival,” they added.

To help rescued birds like Mr. Percival, you can make a donation to Twinnies Pelican and Seabird Rescue.
Short URL: http://tinyurl.com/y69lod9m