“You can’t take Peytyn anywhere without Ellie following her” ❤️️

When Kevin Smith and his wife first rescued a pit bull named Ellie, she was too scared to move.

She seemed particularly frightened of people, especially men, but Smith refused to give up on her. He worked to earn her trust and showed her lots of love, and eventually, his efforts paid off.

“At first, I was worried because she was terrified to even leave the ground. She was frozen to the ground, and you could tell she’d had it rough,” Smith told The Dodo. “Now she wants everyone to love her and pet her. She begs for attention.” 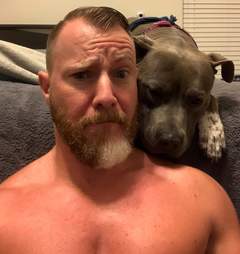 For a year, Ellie enjoyed her life as an only child, but when Smith’s wife got pregnant, they weren’t sure how she’d react to their growing family.

As the months passed, Ellie seemed more and more open to the idea of having a little sister. “When my wife was pretty close to her due date, Ellie used to lay her head on her belly and listen to her,” Smith said. “It was pretty much a nightly occurrence.” 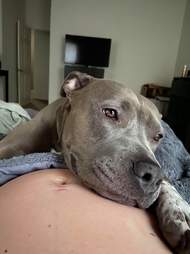 The first time Ellie was introduced to Peytyn, the dog immediately fell in love with her little sister.

It was as if she’d been waiting for that moment her entire life: “We had Peytyn in the bedroom, and usually Ellie is happy to see us, but she just bypassed us and went straight in to see Peytyn,” Smith said. 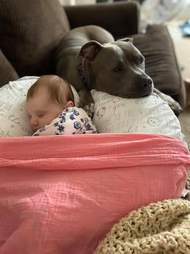 Ellie now acts as 5-month-old Peytyn’s full-time babysitter and security guard. Wherever Peytyn goes, Ellie isn’t far behind — which was a little annoying at first.

“You can’t take Peytyn anywhere without Ellie following her,” Smith said. “You take Peytyn to the changing table and Ellie’s there making sure her baby’s OK … She just sits right there and stares at you. You pick her up to move her and she’s following you.” 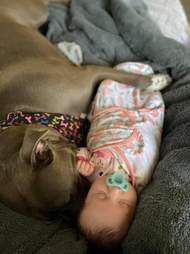 Ellie makes sure to check on Peytyn when her parents are otherwise occupied. Whether they’re eating dinner or taking a shower while watching the baby monitor, Ellie will pop into Peytyn’s room to say hi. 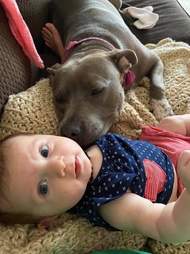 “Ellie keeps a constant eye on Peytyn,” Smith said. “She just sticks her head right above the crib — she never goes into the crib but stays above it and makes sure she’s OK.” 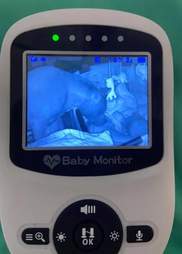 Peytyn has gotten used to Ellie’s constant attention, and has learned how to pet her dog gently. “Ellie’s always sitting next to her and puts her head on her leg, and Peytyn puts her hand on her head,” Smith said. “Peytyn’s learned to pet and be gentle with her.”

Smith has always loved pit bulls, but Ellie’s unexpected devotion to his baby has made him love her even more. “The breed isn’t bad,” Smith said. “They’re actually very gentle and caring.”