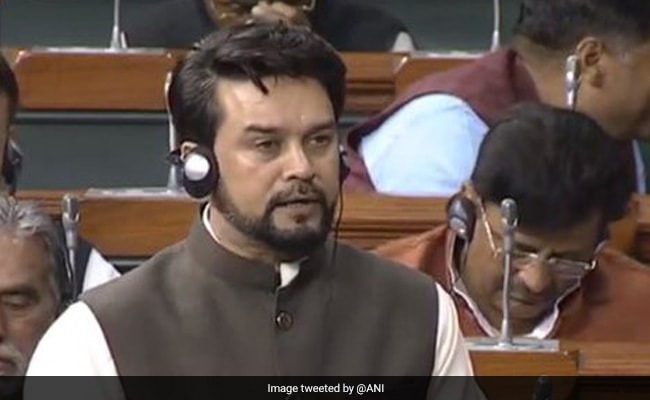 “Who is this boy from Himachal,” Adhir Ranjan Chowdhury lashed out at Anurag Thakur

A fierce row in the Lok Sabha over a Minister’s comments on the Nehru-Gandhi family and a Congress leader calling him a chhokra (boy) led to the first adjournment in this parliament session, which is being held with unprecedented changes because of the coronavirus crisis.

In the commotion, opposition members also accused the Speaker of bias.

The row erupted when Union Minister Anurag Thakur spoke out in defence of the PM-CARES fund, which the opposition says lacks transparency.

“From the high court to the Supreme Court, every court has validated the PM-CARES fund. Little children have contributed to it from their piggy banks. Nehru set up a fund that has not been registered to date. You (Congress) only made a trust for the benefit of the Gandhi family. You made Sonia Gandhi its chairman. It should be investigated,” said Anurag Thakur.

His remarks provoked a roar of protests from the opposition benches, specifically Congress MPs.

“Who is this boy from Himachal,” Congress leader Adhir Ranjan Chowdhury lashed out at Mr Thakur. “How did Nehru come into this debate? Did we take (Prime Minister) Narendra Modi’s name? This two-bit chhokra…”

The Congress loudly demanded an apology from the minister and staged a walkout.

Speaker Om Birla sternly asked opposition members to keep their masks on, saying: “If anyone plays with safety then they will be named and thrown out of the house.”

The Speaker was accused by Trinamool Congress member Kalyan Banerjee of bias and of trying to shield ruling BJP MPs. “If you want, then throw us out. We will not let this go on. We will not allow this,” said the Trinamool MP.

The Speaker, forced to adjourn the Lok Sabha, called an informal meeting of floor leaders to resolve the chaos.