And with that in mind, we must note that Samsung is selling two variants of the Galaxy Note10 Lite in India. There is the 6GB RAM and 128GB storage option that costs Rs 38,999 but why would you really not stretch that budget a tad more and pay Rs 40,999 for the 8GB/128GB option? Each variant is available in aura red, aura black and aura glow colour options, which makes it a total of six options to choose from. Not a bad start in terms of the price. Its direct competition has to be the OnePlus 7T line-up—the 8GB/128GB options are priced at Rs 34,999 while the 8GB/256GB option will set you back by Rs 37,999. 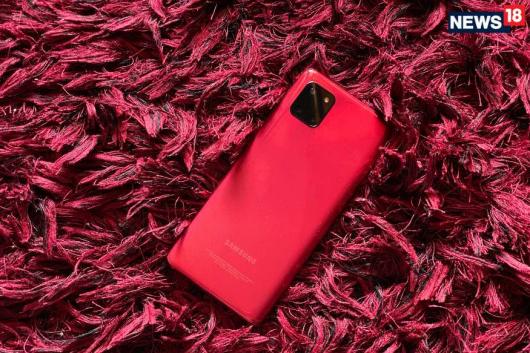 Speaking of the display, and what this real estate does is tick off the basic requirements from a flagship smartphone display—it is bright, vivid colours, good viewing angles and quite sharp too. Super AMOLED displays by default tend to lean towards richer colours, which is why it is good to see the phone set to the Natural colour display mode by default—though you can change this to Vivid in the display settings. This is also an HDR display, which is good for video streaming. The display resolution is the same on the Galaxy Note10 Lite and the OnePlus 7T.

Oh, and did we say, this has got the headphone jack too? If you are still holding on to your old headphones or simply don’t buy into the whole wireless earphones or earbuds game just yet, this must be great news for you. The S-Pen has the same sort of docking mechanism as the Galaxy Note phones have had over the years, and that consistency is good to see.

ALSO READ | OnePlus 7T Review: A Whole Lot of Wow, And a Hint of The OnePlus 7 Pro

But with this price tag, the Samsung Galaxy Note10 Lite does have to let go of quite a few niceties that its elder sibling has. The Gorilla Glass layer is gone. There is no wireless charging. There is no water resistance either. While the OnePlus 7T gets Gorilla Glass at the front and the back, the rest of the checklist is not ticked off by the 7T either. The Galaxy Note10 Lite tips the scales at 199 grams, which isn’t the lightest around. Yet, this is a well-balanced phone that hides its weight quite nicely. If you weren’t in the know of this exact weight stat, you’d probably hold this up and assume the Galaxy Note10 Lite weighs around 180 grams—and that user experience detail is great. For a phone with a large 4,500mAh battery, this is absolute

Flip the Samsung Galaxy Note10 Lite over, and at the back sits the camera cluster that is bound to divide opinion. Personally, camera module layouts have never been much of a bother. After all, I don’t keep looking at the back of the phone to either admire or feel hard done by whatever they may resemble. And if someone else has a problem, they can stop looking at my phone! Nevertheless, the squarish camera cluster on the back of the Galaxy Note10 Lite is surely quite big, but it is there for a purpose and that’s the end of that.

The three 12-megapixel cameras, a wide, a telephoto and an ultrawide, shall do the photography duties. There is no ToF module and while it may have been good to have one, it isn’t really a big miss. And it is quite a big positive to see the good light and daytime photos get very close to what the Galaxy Note 10 manages. Whatever limitations are there, are because of the limitation in the data that a 12-megapixel sensor can give to the image processing to work with. Details are well reproduced as long as you aren’t looking at a really complex frame. Colours are less saturated and lean more towards realistic—which is a great standpoint from which to start editing them. HDR comes into play whenever needed, and usually the camera app is spot on in that regard.

You’ll perhaps be delighted to note that the Galaxy Note10 Lite’s cameras are punching above the perception, when it comes to low light photography as well—good dynamic range, accurate colours and noise is kept well in check. Yes, the Galaxy Note10 does carry a smidgen more detail in most photos, but this triple 12-megapixel camera combination is mostly doing as well. But the OnePlus 7T with its 48-megapxiel + 12-megapixel + 16-megapixel camera on paper seems more versatile when the lighting is complicated or you are trying to frame a really complex scene.

The Samsung Galaxy Note10 Lite is powered by the Exynos 9810 chipset. There is no other way to put this, but this processor has been around for a while now. Does that blunt the performance edge? No, absolutely not. Yes, if you are to run synthetic benchmarks, the Qualcomm Snapdragon 855+ on the OnePlus 7T will most likely be ahead. However, the real-world usage is quite different from benchmark tests, and that is where, the Exynos 9810 does still stand its ground. Apps, games, multi-tasking and staying cool—all this is done by this chip without any struggles. What you get is a pretty powerful and capable smartphone, and there are no hints of any stutters or slowdowns.

One must keep in mind that the Galaxy Note10 Lite uses UFS 2.1 storage, which quite fast in its own right, is going to be a tad slower than the UFS 3.0 storage that the Samsung Galaxy Note10+ has, and also does the OnePlus 7T.

But while the OnePlus 7T doesn’t have a memory card slot for you to play with, you get a chance to expand the 128GB storage on the Galaxy Note10 Lite. 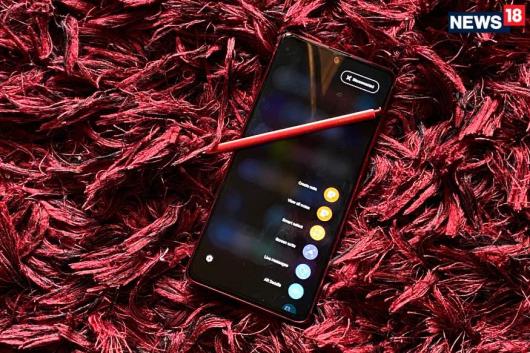 The complete set of S-Pen apps and capabilities make this a rather enticing proposition for those who want a stylus, but probably stayed away from the Galaxy Note series because of the price tag. (Image: Vishal Mathur / News18)

A lot of that also has to do with the improvements under-the-hood which the One UI 2.0 brings to the table. Everything just feels snappy, there is no delay in opening apps and the dark mode adds a touch of class to the entire experience. The S-Pen, which is one of the primary reasons why you would consider a Samsung Galaxy Note phone in the first place, has the software side of things spot on. The Air Command menu pops up when you pull out the S-Pen. And then there are the usual suspects with the S-Pen functionality—the notes app, the ability to scribble notes even when the phone screen is locked and also put your comments on screenshots, for instance. Yes, you can turn handwriting to text too. This is all fun and very productive too. You can even use this as a remote control by configuring the physical key on the stylus for certain click combinations to execute certain tasks in apps—single click to take a photo and double click to switch between the front and the back cameras for instance, in the camera app. The detailed options are available in the settings menu, which is great fun to tinker around with.

Whether you need a stylus or not, the Samsung Galaxy Note10 Lite must be on your watchlist if you are looking to buy a phone just this side of the Rs 40,000 price point. It would be quite fallacious to compare this with the likes of its elder sibling or other Android flagships, such as the Huawei P30 Pro. What the Galaxy Note10 Lite does is it goes into a battle with the OnePlus 7T and comes away as a very capable alternative. Something the OnePlus phones haven’t had in a long time. Samsung took their own sweet time to get this right. One might always nitpick about this or that, but the reality is that the Galaxy Note10 Lite is doing a brilliant balancing act of the price and user experience.