Edie was found on the side of the highway, hurt and alone. Her injuries suggested that she may have been thrown or fallen out of a moving car, and when she was taken in by Four Peaks Animal Rescue, she was incredibly scared.

Troy Dixon-Sekaquaptewa and his wife Daynalyn saw Edie’s pictures online and immediately fell in love. Even once they met her and saw how scared she was from whatever she’d been through in her past, they still knew she was meant to be their dog. 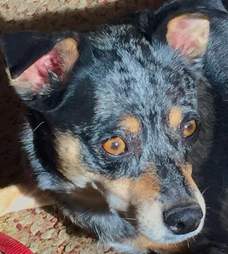 “When we went to the rescue to meet her, she was so timid, we were barely even able to pet her before she’d run off and hide,” Dixon-Sekaquaptewa told The Dodo. “Of course we had to take her home.”

The couple knew that with love and patience, Edie could start to heal and break out of her shell. They took her home and began the long journey of trying to show her that she was finally safe now. 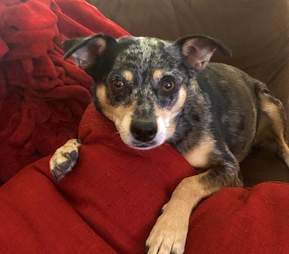 “We could tell that she wanted to love and be loved, but she was just paralyzed by her previous trauma,” Dixon-Sekaquaptewa said. “It would be months before she didn’t run outside after one of us tried to talk to her. It took a lot of patience. And a lot of treats.”

Through it all, Edie’s new family was so patient and gentle. Finally, everything just clicked, and Edie blossomed into the dog they always knew she was at heart. 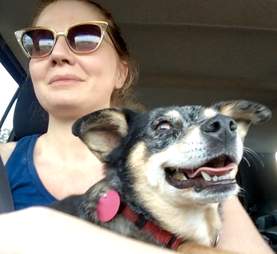 “One day, it was like a switch flipped and she realized that she didn’t have to be afraid anymore,” Dixon-Sekaquaptewa said. “She started greeting us at the door, smiling, wagging, and jumping around in happy dances. She went from being sad and scared all the time to a totally different, affectionate, communicative, joyful dog.” 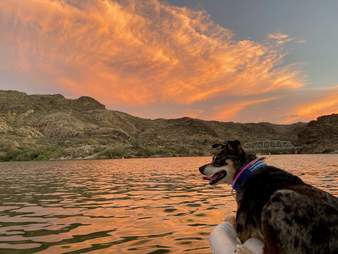 Once Edie finally felt safe in her new family, they realized that she actually loved going on adventures. Dixon-Sekaquaptewa has been kayaking for around 15 years, and one day he decided to try taking Edie with him. He started her on a calm lake, and she did so well that he began taking her down the river.

Along the river, there are tons of wild horses who hang out and graze — and Edie always loves to watch them as she and her dad float by. 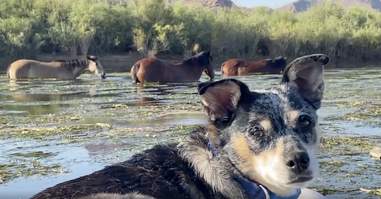 “The rescue we adopted her from also had horses on the property so she’d been around horses before,” Dixon-Sekaquaptewa said. “The first dozen trips down the river she was keen every time we passed the horses. She still watches them as we pass by but has never barked or tried to go after them.”

Edie is used to the horses by now, but she still loves seeing them every time she and her dad go on a kayaking adventure. Everything used to scare her, but now she floats down the river with her dad past huge wild horses and isn’t fazed at all.

“We have a great deal of respect for these wild horses,” Dixon-Sekaquaptewa said. “I’ve been down the river with Edie hundreds of times now and it’s always magical.” 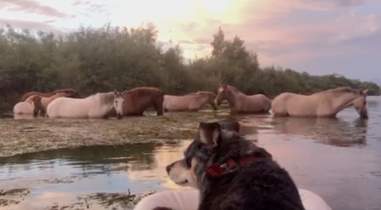 Edie went from hiding in fear to going on constant river adventures, and her family is absolutely thrilled with her incredible transformation. All the love they gave her showed her that she could finally be herself.