Scream’s Ghostface Is Coming To Among Us For Free 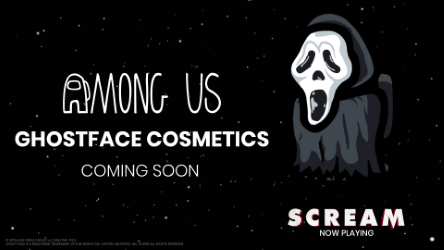 Ghostface from the Scream movie series is coming to Among Us as part of the popular game’s first film collaboration. This was announced during a livestream featuring actors Jack Quaid and Mason Gooding, along with streamers Tina Kitten, 5Upps, Noah J, Kara Corvus, and Chilled Chaos.

The Ghostface content, which includes a hat and a skin, will be given away to all players for free “soon.” You can re-watch the “Scream plays Among Us” video below to see Quaid, Gooding, and the streamers play the game, and discuss the film and this partnership.

While Ghostface/Scream is the first movie collaboration for Among Us, the popular independent game has welcomed big-name guests before. Politician Alexandria Ocasio-Cortez played Among Us and discussed her policies, while Jimmy Fallon played during his late night TV show.

Developer Innersloth said in a news release that this is the “first” film collaboration with Among Us, which seems to suggest more might be coming in the future. It makes sense to start with Scream, as the film is all about finding out who the killer is, just like in the game.

Scream opens in theaters today, January 14, and it’s the first new entry in the series since 2011’s Scream 4. Series stars Neve Campbell, Courteney Cox, and David Arquette return in what GameSpot’s Scream review said was an “engaging new spin on the Scream story.”

The new Scream is expected to dethrone Spider-Man: No Way Home this weekend at the box office and take home the No. 1 spot for the weekend. In other news, Campbell recently discussed getting attacked by a bear on a movie set when she was 17.