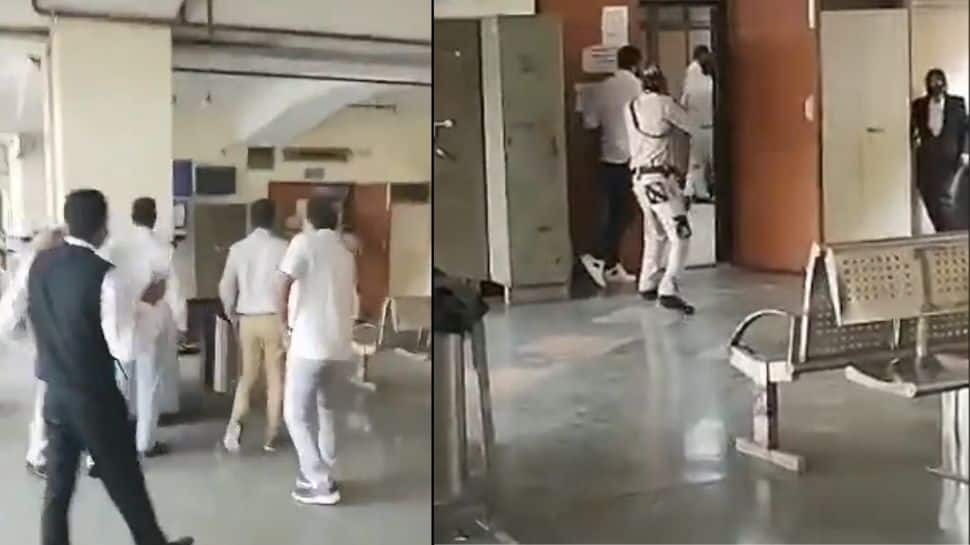 New Delhi: At least three people including gangster Jitendra Gogi allegedly died in a firing incident Friday at Delhi’s Rohini court, police said. Deputy Commissioner of Police (Rohini) Pranav Tayal said the assailants were in the uniform of advocate when they fired at Gogi. Police team also fired in return, the DCP said.

Delhi’s notorious gangster Jitender Mann ‘Gogi’, who was fired upon by assailants at Delhi’s Rohini court has died, the Delhi Police informed. It is estimated that around 35-40 rounds were fired in the court premises.

Shilpesh Chaudhary, vice president, Rohini Court told Times Now, “It is a huge security lapse. I was at the bar office. When we heard the firing sound. we went there. The two accused came in the uniform of a lawyer. Police neutralised them.”

#WATCH | Visuals of the shootout at Delhi’s Rohini court today

As per Delhi Police, assailants opened fire at gangster Jitender Mann ‘Gogi’, who has died. Three attackers have also been shot dead by police. pic.twitter.com/dYgRjQGW7J

Who is Jitender Gogi?

Gogi has been involved in several criminal cases and jailed at Tihar. He was being produced in court when members of a rival gang entered the court, in the garb of lawyers, and opened fire.

According to media reports, the Special Cell of Delhi Police said that Jitendra Gogi had earned a lot of wealth through crime. Gogi’s network has more than 50 people. During the arrest of Gogi in 2020, a huge amount of cartridges and arms were recovered. Six automatic foreign pistols, more than 70 live cartridges, a car robbed from Paschim Vihar were recovered from Gogi, a report by Aaj Tak states.

The incident points at serious security lapse and has raised alarm bells ringing across the capital. Further details are awaited in the case.

2021-09-24
Previous Post: Mahela Jayawardene roped in as consultant for Sri Lanka’s T20 World Cup campaign
Next Post: Mamata Banerjee: Lakhs of crores of rupees donated to PM-CARES, where is that money? – Times of India