He really needed their help ❤️

On Friday, a group of firefighters were battling back flames in Ipueiras, Brazil, when a large animal popped out of the grass.

The anteater, a southern tamandua, tried to rush away from the smoldering bushes, but he wasn’t quite fast enough. Soon, the anteater was surrounded by flames and the firefighters knew they needed to act fast to help the animal. 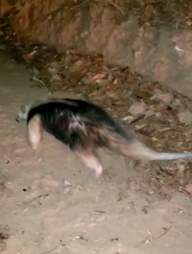 The firefighters started to follow the anteater when he suddenly stopped and stood up on his hind legs.

He spread his arms wide as if to surrender — a position sometimes referred to as the “anteater’s hug.” 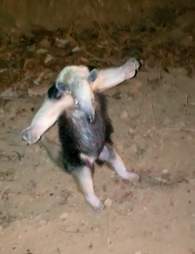 “He was scared and I think he felt threatened because he stopped, stood up and made a movement as if to make himself bigger so that we were afraid of him,” Lieutenant Dutra, a member of the Ceará Military Fire Department, told The Dodo.

Anteaters have strong arms and claws, which they use to tear apart termite nests and defend themselves against predators. While they have poor vision and hearing, when an anteater feels threatened, he can be dangerous.

The firefighters, who are trained in animal rescue and removal, knew it was worth the risk to bring the anteater to safety.

Habitat loss, the illegal pet trade, and the intentional burning of sugarcane fields and forest by farmers threaten anteaters and other wildlife in Central and South America. Luckily, the firefighters were able to capture the anteater and release him into a nearby area unharmed.

“We left him in a location … similar to where we found him, so that he will have water and food available,” Dutra said.

Thanks to the crew, the anteater has another chance to live out his years safely in the wild.