“He does seem ashamed occasionally when I catch him out, he has this funny tone in his meow as if he was saying, ‘What you doing here, Mum?’”

Chopper has always been an incredibly social cat who loves exploring outside and meeting new people. When he and his family moved to a new neighborhood a little over a year ago, his parents had no doubt he’d soon be best friends with all the neighbors, and they were right.

“Our previous neighbors also knew who he was because he was so cheeky and would go in their house if their back doors were open,” Holly-anne Neveen Shaheen, Chopper’s mom, told The Dodo. 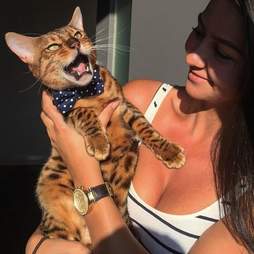 Now, Chopper spends his days exploring the neighborhood and hanging out with all his best friends. He’s been spending even more time out and about lately because his family recently got a new kitten and he’s not a huge fan just yet. His parents aren’t always sure who he’s hanging out with throughout the day — but luckily, Shaheen’s neighbors are constantly sending her pictures and videos of Chopper pretending he lives with them.

“The neighbors whose houses I know he goes to like him, especially the ones across from us,” Shaheen said. “They would probably be his favorite. They have a few chairs out the front of their house which the sun beams on for most of the day so he tends to sleep on that too. They have cameras and it notifies them when someone is at the door, it’s usually him.” 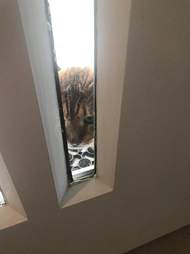 Shaheen gets videos and pictures of Chopper’s adventures from various neighbors whose numbers she has, but she knows that Chopper also spends time with neighbors who she hasn’t even met yet. Occasionally when she’s walking or driving through the neighborhood she’ll catch him in the act — and he’s always a little embarrassed when that happens.

“He does seem ashamed occasionally when I catch him out, he has this funny tone in his meow as if he was saying, ‘What you doing here, Mum?’” Shaheen said. “It goes really high-pitched and then [he] starts trotting towards me following me home.” 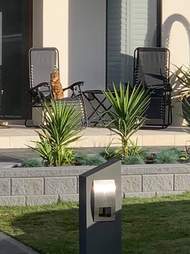 Even though Chopper is pretty well-known throughout his neighborhood, not everyone knows who he is and where he comes from — and Shaheen discovered that one family actually thought he was a stray who was trying to adopt them as his family.

“The first time I saw him a few roads down when I was going for a walk, I saw him walking up their driveway so I called his name and he started meowing really loudly that they opened their front door,” Shaheen said. “Chopper looked at me, turned around and then proceeded to walk in their house. I walked over and they told me they thought he was a stray and was pointing to his food and water bowl they had outside for him. They also own a cat which is why I think he liked that house.” 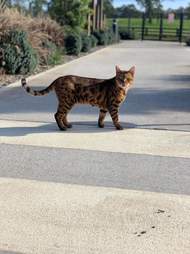 Chopper is incredibly loved and has a very happy life with his family — he just loves to explore and meet new people. Of course, pretending to need a home probably gets Chopper even more love and attention, and that’s definitely his goal in life, so his parents really aren’t too surprised that he puts on that act.

Wherever he and his family live, Chopper will always make a point of getting to know his neighbors. His family has accepted that he’s basically the neighborhood mayor, and that will never change. 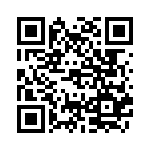