One evening last year, a little green visitor arrived unexpectedly to Sita Hood’s front porch. The visitor was a toad — and she showed no hesitation when it came to making herself at home.

Hood could have given that audacious amphibian the boot. But instead she offered a shoe. 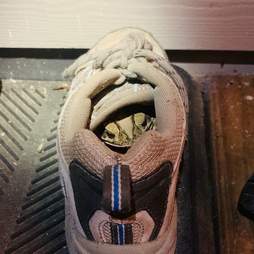 The toad evidently enjoyed that first night so much, she decided to stay. Each day from there, after sunset, she’d snack on bugs on and around Hood’s porch.

She became such a fixture there, Hood even named her — Jabba the Toad.

“I started leaving the light on to attract bugs for Jabba,” Hood told The Dodo. 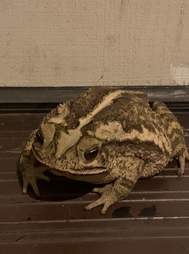 When Jabba wasn’t hungry, or just needed a rest, she would always return to her favorite spot — one of Hood’s running shoes left out on the porch. 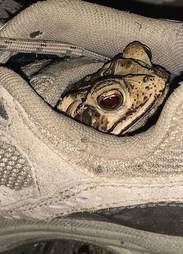 Having a toad occupying her shoe meant that Hood couldn’t wear it, of course. But Hood didn’t mind.

“Donating my shoe was no big deal,” she said. “If it afforded her comfort or protection, why not?”

Jabba, no doubt, appreciated Hood’s hospitality — and she clearly didn’t forget about it. 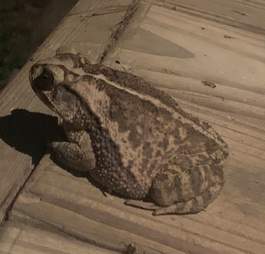 One day, near the end of summer, Hood watched as Jabba hopped away from the shoe, off the porch, and into the woods surrounding her home, presumably to hibernate through the colder months.

Hood’s shoe was free for her foot for the first time in months — but it wouldn’t be toadless forever.

The next spring, Jabba returned.

“One morning, there she was in my shoe,” Hood said. 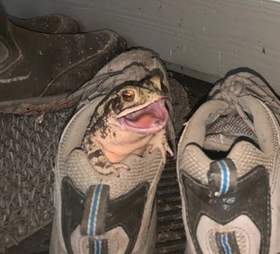 Jabba’s second summer at home in Hood’s shoe transpired much like the first had. But there was one little incident.

Apparently, not everyone knew of Jabba and Hood’s arrangement.

“A well-meaning friend picked up my shoes, and put Jabba in the flower bed,” Hood said. “I put my shoes back and, undeterred, Jabba was back later that night.”

Hood even put a sign above the shoes, just to make sure there’d be no more uncalled-for evictions. 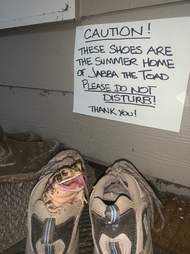 Like the first, Jabba’s second summer in the shoe eventually came to an end. One day, she just up and left.

Hood isn’t sure if she’ll be back next year, but either way, her memories of Jabba will always remain. 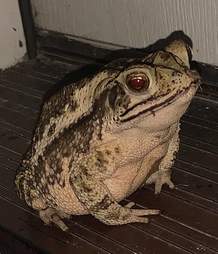 Even though Hood likely never imagined that she’d play host to a toad, going above and beyond in the process, Jabba was more than just a toad living in her shoe.

“I was grateful and delighted to have a friendship with Jabba,” Hood said. “We are all part of the web of life, and on good days, [are] all here for each other.”