“[I was in] utter disbelief followed closely by amazement that she was actually alive.”

Kristyn Gamblain was heading down the highway on her way to work when she suddenly noticed a fuzzy black ball at the base of one of the highway barriers. She only saw it for a second before it was out of sight again, but as she continued on her way, a thought popped into her head that she couldn’t ignore: Was the fuzzy black ball a kitten in trouble?

Even though she had no real evidence, Gamblain couldn’t shake the feeling that she’d just passed a kitten who needed her help, so she quickly turned around. She couldn’t remember exactly where she’d seen the potential kitten, so she slowed down a bit, much to the annoyance of all the cars behind her. Finally, she spotted the fuzzy black ball again and carefully pulled over on the side of the highway.

Within seconds, Gamblain realizes her suspicions were absolutely correct. The fuzzy black ball was indeed a kitten, and the poor little thing was very stuck.

Somehow, the kitten had gotten herself wedged into the space between two barriers. Her front half was stuck and her bottom half was wiggling free, which is what Gamblain had seen as she’d driven by.

“[I was in] utter disbelief followed closely by amazement that she was actually alive,” Gamblain told The Dodo. 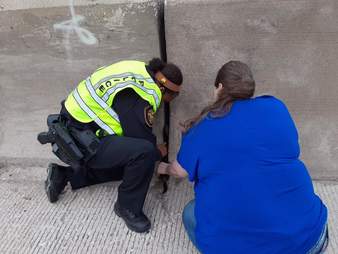 As Gamblain tried to figure out how she was going to safely free the kitten, a highway patrol named Officer Bennet saw what was happening and came over to try and help. A few minutes later, a few cop cars pulled up and helped to section off the area and divert traffic — all so that the tiny kitten could be rescued safely. 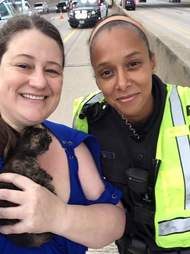 Gamblain was thrilled that she’d somehow attracted an entire team to help her free the kitten. The poor little cat was incredibly wedged in there, but finally, after a lot of maneuvering, they managed to gently pull her free. Everyone cheered and celebrated, and Gamblain was so grateful that she’d trusted her instincts and drove back to help.

“She gave a little meow after being freed and then she buried herself in my arms when I scooped her up — she honestly seemed a little shell-shocked but relieved to be rescued,” Gamblain said. 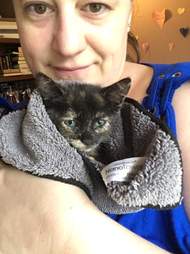 One of the officers asked Gamblain if she was planning on keeping the kitten — and even though she’d just adopted another cat the week before, she immediately said yes.

“How could I not when I just spent 45 minutes rescuing her,” Gamblain wrote in a post on Facebook. 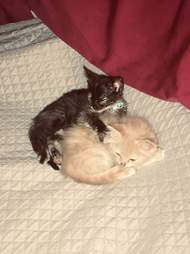 Gamblain decided to name the kitten Jersey. She’s now settling into her new home wonderfully, and couldn’t be happier that her mom somehow spotted her that day. Gamblain hadn’t been planning on adopting another cat, but as soon as she saw Jersey, she knew it was meant to be.